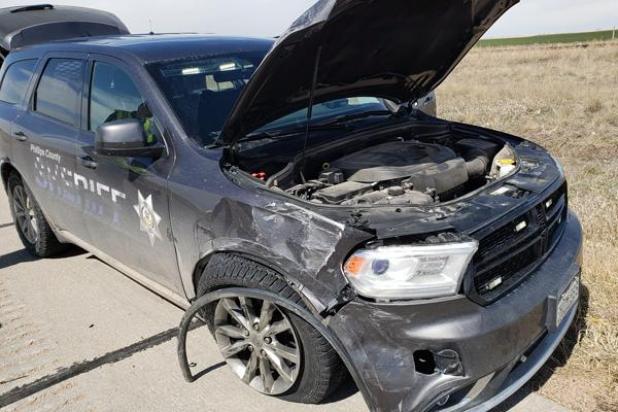 This Phillips County Sheriff’s Office vehicle was damaged in a high-speed chase Sunday.

On Sunday, March 22, the Phillips County Sheriff’s Office was involved in a high-speed chase that resulted in damage to PCSO vehicles and the arrest of a juvenile male.

According to a press release from PCSO, at approximately 12:01 p.m., PCSO was advised of an active vehicle pursuit of a stolen Subaru SUV in Logan County. The vehicle was reported on U.S. Highway 6 heading eastbound toward Phillips County at a high rate of speed with a juvenile male driver and a juvenile female passenger.

The driver of the vehicle was wanted for an assault and theft of a motor vehicle in Fort Collins. Due to the serious nature of his offenses and the extreme risk to public safety, PCSO continued the vehicle pursuit as the vehicle entered Phillips County.

During the pursuit, the vehicle was traveling in excess of 115 mph, heading eastbound toward Paoli.

At approximately Phillips County Road 11, the driver of the vehicle intentionally targeted deputies in their vehicles in an attempt to flee. The driver struck one patrol vehicle at approximately 80 mph, resulting in a total loss of the vehicle. The deputy was evaluated at Melissa Memorial Hospital for minor injuries.

As the vehicle continued eastbound, he again targeted two other deputies, striking both cars in an attempt to spin the patrol vehicles off the roadway. The ramming of the vehicles resulted in significant damage to both patrol cars. Fortunately, neither deputy suffered any injuries as a result of the crashes.

Once across the state line, the Chase County Sheriff’s Office continued the pursuit of the vehicle. It continued at a high rate of speed through Imperial, Nebraska, and Wauneta, Nebraska.

Both the driver and the passenger were taken into custody by the Chase County Sheriff’s Office and subsequently turned over to PCSO.

The juvenile male was charged with three counts of first-degree assault on a peace officer, a felony; four counts of reckless endangerment, a class 3 misdemeanor; eluding, a class 5 felony; and reckless driving, a class 2 traffic misdemeanor.

He was transported to Platte Valley Youth Services Center in Greeley until a detention hearing could be completed.