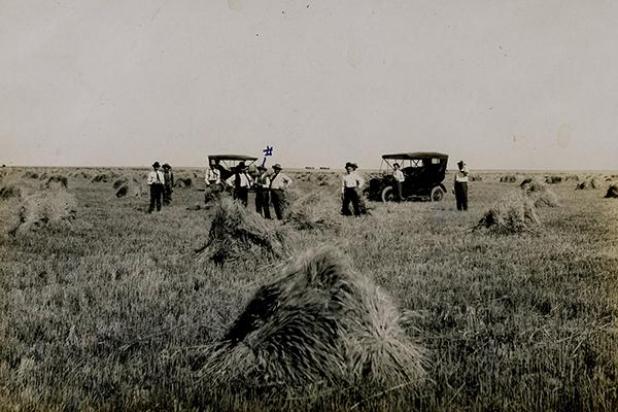 A group of men is pictured during wheat harvest on the farm of Wilhelm Jasper, approximately 1908. The man marked left of center may be Whit Irwin. This field was planted with Turkey Red fall wheat and averaged 38 bushels per acre. Jasper bought 480 acres approximately 5 miles southwest of Holyoke in 1907 and bought Otto Fulscher’s house and barn in Holyoke in January 1908 and had the house and barn moved to the farm. — Source: Phillips County Museum

Red’s Liquors LLC is set to be open for business this Friday, Oct. 10, at 140 E. Denver St. Owners Jeff and Olga Sullivan purchased the building and remaining inventory from Lucky’s Liquor, owned by Bryan Lenhart and Mike and Janice Hibbard, which recently closed at that location.

In honor of Phillips County’s 125th year, there will be a celebration at Homesteaders Park on Oct. 12.

National Wind’s filing for bankruptcy appears to be in the final stages, reported Phillips County commissioners at their Sept. 30 meeting. National Wind was the company working on the NECO Wind project south and west of Haxtun.

Phillips County Court House received a new boiler on Sept. 30. The old boiler, which is believed to be the original one, failed right around Christmas Day last year, and the courthouse has been without central heat since that time. The new steam boiler should be up and running by the end of this week.

Mark Brown was hired as the new city superintendent, following a brief discussion and a 6-1 vote at the regular meeting of the Holyoke City Council on Oct. 4. Brown will assume the responsibility of superintendent on Nov. 3.

Julia Starkebaum of Julia’s Fashions in Haxtun and LaRae Hethcote of The Shaker Box in Holyoke will be joining together to open “Heart to Heart” for the holiday season in Holyoke. Oct. 15 will be opening day for the new seasonal business, which will be located at 116 W. Denver St. for about three months. Included in the store will be decorating lines, clothing fashions, tapestries, floral pieces, a jewelry line, pictures and many other gift lines.

S.D. Whitman Jr., Kansas-Nebraska Natural Gas Company vice president, announced today the appointment of Dale McDorman, Holyoke, as manager of the company office in Holyoke. McDorman is a native of Holyoke and began his employment with Kansas-Nebraska here in 1959, working as a serviceman until his present advancement.

Phillips County Judge A.C. Adams, who has served as county judge for the past five and a half years, has now retired. The vacancy will be filled by appointment by the governor from a list of names certified to him by the 13th Judicial District nominating commission.

Funeral services were conducted Oct. 7 in Holyoke for Viola May Werner, 100, who passed away Oct. 3.

A boxcar was sidetracked near Amherst Monday by a train crew, and Sheriff H.M. Clements of Holyoke was notified that in the car were four suspicious-looking characters. About 4 p.m. the sheriff located the men some distance from the freight car, where they had built a fire by the tracks. They said they are from Iowa, and the two oldest of the four confessed to evading the registration and conscription laws.

The Dragons settled their third game of the season last Friday night with the Akron Ramblers by a scoreless tie in a game that proved to be another thriller. Although both teams threatened a number of times, neither of them was able to push the ball across for a touchdown. Neither team made many first downs, the game being almost entirely a defensive one.