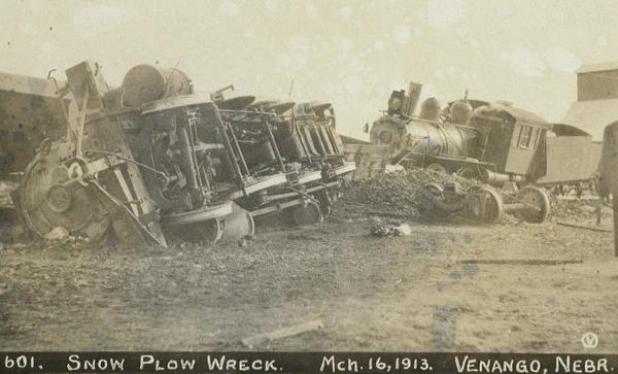 The March 21, 1913, edition of The Holyoke Enterprise reported that “one of the worst wrecks on this line of the Burlington” occurred March 16 at Venango, Nebraska. The train was made to open the road for traffic between Sterling and Holdrege, Nebraska, and consisted of a pilot snow plow, small engine, car loaded with coal, engine and caboose. The train was just passing through Venango and was making a run for a snow drift when the snow plow dropped down and struck a heavy iron pin which had been placed in the yards by surveyors when the track was laid out. The first engine turned over and landed about 100 feet from the track, instantly killing the engineer and badly scalding the fireman, both of Sterling. — source: Phillips County Museum

Wages Volunteer Fire Department is celebrating its 30th anniversary of service this weekend.

Shay Realty Inc., auction and real estate company based in Wray, announced this week that Shannon Schlachter of Holyoke has joined the firm as a licensed Colorado associate broker.

A series of increasing fines have been agreed upon by City attorney Al Wall and the judge for dogs found to be unlicensed within Holyoke. Instead of presenting dog owners with a summons to court, a penalty assessment will be given for first and second offenses, according to Wall at the June 1 city council meeting.

Phillips County courtroom now has video equipment up and running, Sheriff Rob Urbach reported recently. A camera system used with a secure internet connection was provided using funds from a Courtroom Security Grant. Previously, prisoners in other jails needed to be transported to Phillips County for court, but now the video equipment can be used to speak with them in courtrooms outside the county for things like advisements and bond hearings.

Music teacher Pat Wiebers is retiring after 30 years as an educator, with the past 11 years being in Holyoke.

HHS sophomore Whitni Redman is preparing to take off on a 10-day trip to Los Angeles, California, where she will participate in the National Youth Leadership Forum on Medicine Offers Career Insights. The trip will begin June 20.

Kipp Struckmeyer was chosen to serve  as a state FFA Office of Executive Committee member for the 1995-96 year at the 67th state FFA convention held June 4-6 in Cortez. Those receiving state FFA degrees at the convention were Renata Pugh, Monica Weber, Rudy Haynes, Glen McCallum and Gabe Hubbard.

The long-awaited chicken pox vaccine is now available in local doctors’ offices. The FDA has been promising the vaccine (Varivax) for a long time, and it just recently became available.

Taking its first steps toward providing cable television service in Holyoke, the Phillips County Telephone Company has requested a franchise agreement from the City of Holyoke.

During the vacation church school held at the United Methodist Church the week of June 1-5, the junior high class, consisting of Roger O’Neal, Marc Newman, Debbie Hebbel, Cindy Bird, Kim Riegel, Cathy Real and Becky Linnenbrink and led by Rev. W.L. Youngblood, buried a time capsule. This capsule is to be dug up during the vacation church school in the year 2000. Instructions about the location of the capsule are to be left in a sealed envelope in the church safe and in several other locations.

Holyoke merchants will hold sidewalk sales Friday and Saturday, June 12-13, between 9 a.m.-5 p.m. Many bargains will be found inside and outside the stores in Holyoke.

Roy Garrett of Oklahoma was arraigned in district court June 8 for grand larceny. He pleaded guilty and was sentenced to five to eight years in the state penitentiary at Cañon City. Garrett was arrested here on April 16 for window peeking. Several residents saw a strange man about their houses. Two stolen watches and a gun were in his possession. One watch and the gun were stolen in Holyoke.

Carl Jung, manager of the Peerless Theatre of Holyoke, announced this week that he had sold his interest to Clarence Brase of Amherst. Brase is reported to own the entire property. Until July 1, Jung will continue to manage the business.

Farmers and ranchers of Colorado are warned to be on the lookout for Japanese fire-bomb balloons that may present a serious hazard, especially in forest and rangeland areas. Balloons have landed intact generally through the west. Even though the mechanism which is supposed to destroy the balloon in the air did not operate correctly, the balloons are extremely dangerous and may explode with great force at any time. They are about 33 feet in diameter and usually gray in color.

With the ground saturated with water and more rain predicted, the committee in charge of the program for the dedication of the Holyoke Municipal Airport decided Monday to postpone the event until some time later in the summer.