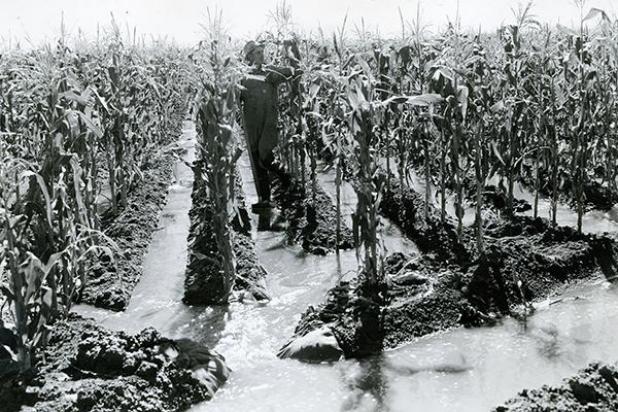 This July 1939 photo shows the new irrigation project that had begun in the fall of 1938 on W.E. Heginbotham’s farm 10 miles southeast of Holyoke. Contour lines for irrigation ditches had been run, with concrete drops and laterals to be established later. This was reported to be the first year a good crop had been produced on the farm, with an estimated average yield of about 60 bushels of corn per acre, compared to 8 bushels per acre from dryland. — source: Phillips County Museum

A $2,000 grant from Pedal the Plains will be put toward new bathrooms at Holyoke Ballpark, as approved by Holyoke City Council at its June 16 meeting.

A new high-definition projection system has been installed at the Peerless Theatre, and the hope is to host Fathom Events in the very near future. Fathom Events will bring live performances right to the big screen in Holyoke. The system is scheduled to be installed July 7.

Holyoke Lions Club has a new home, and the community is invited to take a look at an open house July 2. Located at 125 N. Campbell Ave., the new Lions Den is just north of the former den, which has been purchased by JoAnne Kiernan for use in Jack & JoAnne’s.

An application that was filed by Melissa Memorial Hospital with the federal government for Phillips County to become a Health Profession Shortage Area was recently approved. With the approval, both MMH and Haxtun Hospital can take advantage of loan forgiveness programs for doctors coming out of residency programs. It will also allow the government to set up rural health clinics which would get better reimbursement because it would be located in an HPSA.

A Texas-Montana Trail marker, which was designed as a tribute to the late Everette Lappart, is set to be dedicated July 4 in Brush.

Adolph Coors Company’s cash-for-cans program, launched in mid-January to fight litter, has resulted in the recovery of more than a million pounds of aluminum — some 26 million cans — at the dime-per-pound price set by the regional brewery. Aluminum recovered to date through 166 Coors distributors in 11 Western states totals 1,139,075 pounds.

The Goodwill collection box will be closed June 27-Sept. 1, due to vandalism and a heavy project schedule for the Jaycees this summer. Anyone wishing to donate clean, usable clothing to the Jaycee-ettes may do so by leaving items at the Thrift Shop, which is located in the basement on the southeast corner of Interocean and Denver.

U.S. District Judge William E. Doyle declared Monday that a federal regulation allowing sugar beet producers to pay their workers through crew leaders as middle men was invalid, accepting the argument that the system makes it possible for beet workers to be cheated out of minimum wage earnings.

Rev. Clare J. Hayes, pastor of the local Methodist church the past five years, and his family moved to Alamosa on Thursday after he preached a funeral sermon in the afternoon, his last official duty here. Rev. Tom Franks, new Methodist minister who was recently appointed to Holyoke, will fill the pulpit at the local church Sunday morning.

W.E. Burgess of New Raymer has accepted the pastorate at the Christian Church in Holyoke and will begin his work July 1.

An up-to-date check shows Phillips County is still $30,000 short of its series “E” bond quota of $147,000. The last State report shows that our neighboring counties have reached their quotas. Efforts to reach the Phillips County Seventh War Loan quota are being made and will be continued by individuals and organizations, culminating this week in observance of an “E” day.