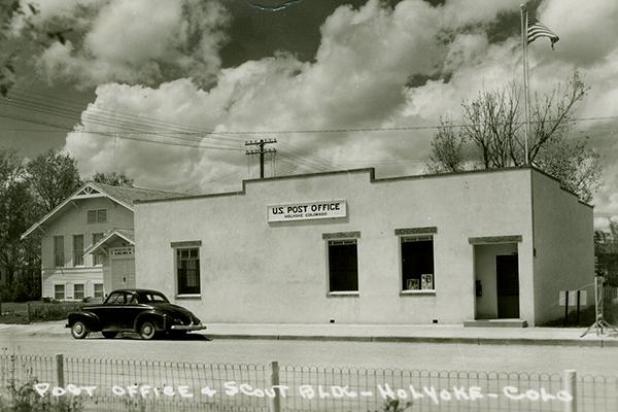 The building at 131 W. Emerson St. was built by Charlie P. Peterson in 1949, with Aug. 15 being the United States Post Office’s first day in the new building. The building was coated with a gray stucco finish, giving the outside an almost white appearance. Entrance to the public lobby was located at the southeast corner of the building. Sitting to the west of the post office was the Scouts of America building, formerly the Grandview schoolhouse before being moved in to Holyoke in October 1948 to be used as a meeting place for local Girl Scouts and Boy Scouts. The USPS was moved to its current location on Interocean Avenue on March 16, 1960, and the Scout building was torn down in May 1981 to make way for the new First National Bank (currently Bank of the West) building. — source: Phillips County Museum

Melissa Memorial Hospital administrator John Ayoub and the East Phillips County Hospital District board reached a mutual decision and noted at a June 30 special meeting that Ayoub will be leaving his position as CEO.

After 15 business-based visits to Holyoke School District during a four-month superintendency transition, John McCleary officially took over his role as superintendent July 1.

Holyoke Swim Club concluded its season at the July 2-3 league meet in Goodland, Kansas, where they crushed 10 pool records, six of which were the team’s own times from the June 20 Goodland meet.

Board members of the Region One Translator Association were saddened by the news of the recent death of John Rietz, owner of RTZ Systems out of Yuma. The translator association has contracted with Rietz and his company for many years to maintain the TV translators in Sedgwick, Phillips and Yuma counties. Rietz’s business will be purchased by Randy Rohrbacker of Wray and will operate under the business name of Power Up Electrical.

Spencer Kimble is set to begin his duties as the new pharmacist at Pamida in Holyoke on July 12.

Dragon’s Wagon Preschool finally has their own playground equipment just outside the east doors of the Phillips County Event Center.

The Phillips County Fair Board has been busy putting together nine different games to be featured at the fair July 29-31. Games will include a duck pond, darts, baseball toss, basketball, football toss, wheel of fortune, goblet toss, ring toss and plinko.

Numerous charges are pending against individuals who were involved in the explosion of three pipe bombs in Holyoke. The Holyoke Police Department began its investigation July 7. After the three bombs were set off, Greeley’s bomb squad was called in to safely detonate a fourth. A search warrant was issued, and three uncharged bombs were also located.

Nearly perfect harvest weather has prevailed since the first wheat was cut in Phillips County on June 28 and delivered by Wilbur Burchett to the Amherst Co-op elevator on June 29.

Trailer homes and combines from harvest crews have the Phillips County Fairgrounds camping area bursting at the seams. This is the second year that the county commissioners have provided water and electrical hookups for the combine crews at a nominal fee. Approximately 43 trailer houses are in the camping area.

On July 10, weather conditions permitting, flies and mosquitos in the Holyoke area will be sprayed from the air with insecticide early in the morning. Aerial spraying is said to be a much more effective method of insect control than the fog method previously used here.

As harvest is beginning and farmers are in a hurry to do their trading, Holyoke town people are requested by town officials to keep their cars off the main business streets during busy trading hours, that farmers may park their cars to best advantage. Also, center parking on the streets must be discontinued in the interest of safety. The signs will be brought out if necessary to remind people that the center of the street must be kept open for moving traffic.