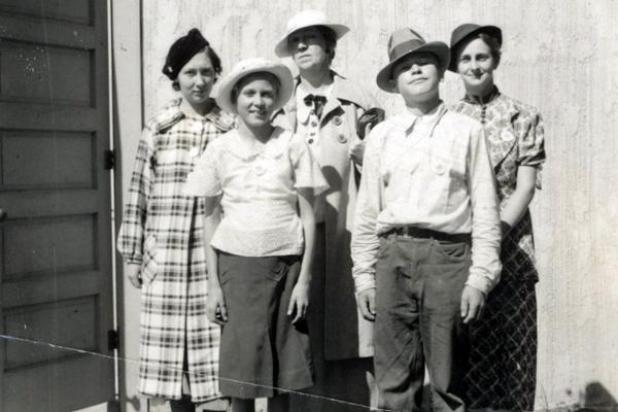 This “4-H Club gang” includes Phillips County champions who earned a trip to the 1936 Colorado State Fair in Pueblo. They are pictured from left, front row, Lorraine Naggatz (Buchleiter) of Amherst and Rupert Johnson of Haxtun; and back row, Maxine Miller (Davis), Myrtle Elfeldt and Alice Taylor (Bamford), all of Paoli. — Source: Phillips County Museum

Peekin’ into the Past

Ballyneal Golf Club expanded its Turtle Bar to a full-scale restaurant this season, adding a new kitchen as well. It has relocated from the previous restaurant area in a different building at the world-renowned golf club located about 14 miles southeast of Holyoke. And now, during the golfing off-season, dining and lodging at Ballyneal will be open to the public from Nov. 1 through the end of April.

The Lady Dragon softball team members carved a notch in HHS history Oct. 16 when they qualified for the 3A state softball tournament with a decisive 19-6 win over Yuma. This marks the first state appearance for an HHS softball team.

Nine inches of snow blanketed the Holyoke area last Sunday night, Oct. 22, and Monday, Oct. 23. It didn’t stick around long though, as temperatures warmed up on Tuesday. According to weather observer Dale Anderson, the snowfall resulted in 1.24 inches of precipitation Sunday and Monday.

After visiting at length with physical therapist Jerry Huggins, East Phillips County Hospital District decided at its Oct. 17 meeting to purchase Physical Therapy Clinic of Holyoke. After announcing his decision to relocate, Huggins gave the district the first opportunity to purchase the clinic.

Golden Plains Recreation Center recently announced the receipt of a grant which will enable the organization to put a full-time director in place. Funds in the amount of $22,730 were awarded to GPRC through the Youth Crime Prevention and Intervention Grant Program.

Plans for an assisted living facility in Holyoke have thrown a new twist into the debate over zoning in the Heginbotham Trust First Addition. After weeks of discussion and several public hearings, the zoning issue was tabled at the Oct. 17 meeting of the Holyoke City Council.

Homecoming activities will start tonight with a bonfire rally to be held at the practice field. For the past several weeks, freshman-sophomore and junior-senior teams have been storing boxes and other materials for the bonfire. Boxes have been fairly easy to find, but finding a safe place to hide the loot from each other has been a major problem for the two teams.

Federal, state, county and local officials join with residents of northeastern Colorado and western Nebraska in celebrating the opening of a 15-mile stretch of Interstate 80 S between Sedgwick and Julesburg, making a divided highway available from Denver to Omaha, Nebraska.

There are now about 12,000,000 drug abusers doing their thing in the United States today, and only one-fourth, 3,000,000, are on LSD, heroin or speed. The rest are hooked on that other common drug, alcohol, which is today’s No. 1 health problem.

The arrival of the first new 1946 Ford car and truck was announced today by Leslie L. Kunkel of Holyoke Motor Co. They are now on display in the company’s showroom.

Congress is very representative of the people of the United States in one thing. It is not talking much about the national debt, and we do not like to think of it either. The near $300 million of debt which we now carry is going to be with us a long time.

On the morning of Oct. 22, the Denver and Rio Grande Railroad was to start a 16-car train over its rails on a trip that covered all of its broad gauge lines, in commemoration of the 75th anniversary of the day when the first train ever passed over the D&RG rails.