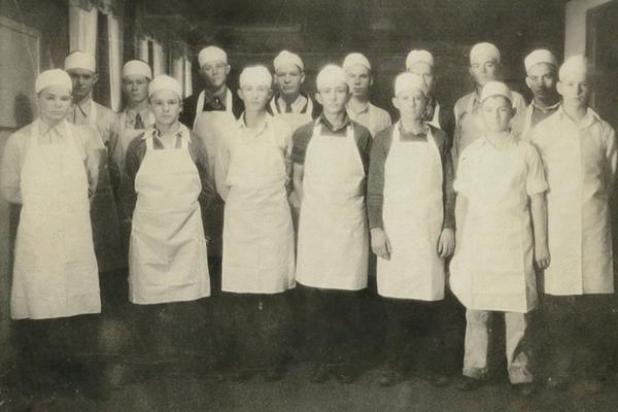 These Holyoke boys don their aprons for their home economics class. The photo is thought to be from the 1930s. —Phillips County Museum

Five Years Ago
April 19, 2012
Following debt restructuring at Ballyneal Golf Course in early March, the new company is encouraged by membership potential and looks forward to opening the golf season May 22. Head golf professional and general manager Matt Payne said that previous members who had contracts with Ballyneal LLC had to sign new contracts with Ballyneal Golf LTD.
Dusty McConnell and Reid Baumgartner, both of Holyoke, took home the top prize in the annual Southwest Ike’s Catfish Tourney held April 7 at Enders Lake in Enders, Nebraska, hauling in 23 pounds, 2 ounces of catfish — 11 pounds more than the second-place team.
Strong wind gusts put a damper on people’s weekend activities Sunday, April 15, when wind gusts upward of 50 mph were recorded for much of the day, even uprooting a large tree north of the Holyoke School District administration office.

Ten Years Ago
April 19, 2007
After 27 years of teaching, 26 of which have been in the Holyoke School District, José León will celebrate a final fiesta with his students this May as he announced his upcoming retirement from teaching the Spanish language courses to Holyoke JR/SR High students.
Holyoke High School senior Jared Sullivan was recently selected for the Western Golf Association Evans Eisenhower Scholarship. Through the caddie scholarship, he will receive a full-ride tuition unique to the University of Colorado at Boulder and will live in the Evans Scholars house provided by the program.
Kathleen L. Olofson, CMC, City clerk/treasurer for the City of Holyoke, has earned the prestigious Certified Municipal Clerk designation from the International Institute of Municipal Clerks.
Hank Hassler of Holyoke was recognized April 16 at the Denver Nuggets’ Fan Appreciation Night as a longtime season ticket holder — Only one person had been a ticket holder longer than he had. Each of the 12 longtime season ticket holders was given an authentic autographed jersey worn in a game, and Hassler was given the jersey of No. 31, Nenê, a 6-foot-11-inch, 260-pound basketball player from Brazil.

Twenty-Five Years Ago
April 23, 1992
Eight medals of honor were received last week by Holyoke’s Elton Oltjenbruns, over 46 years after he earned the recognition in World War II while serving with the 102nd Infantry Division.
“Illusions that Tell the Truth” is the full-scale illusion show which will be presented by the Duane Laflin family during the final AWANA awards meeting for the season on April 29.

Fifty Years Ago
April 20, 1967
The musical “Bye Bye Birdie” will be presented at Holyoke High School April 20-21. The musical is a new venture for the school, taking the place of the senior play.
A new health plan has been made available to bank customers of Phillips County. Bank officials point out that hospital-medical costs are rising so fast that most hospital insurance programs are already inadequate. The new program, called Bank-Care, is designed to fill the gap and help pay the other incidentals connected with hospitalization.
The Holyoke Junior High Pirates captured the heavyweight division of a quadrangular track meet here Monday. The local lightweights didn’t fare so well, however, and finished third.

Seventy-Five Years Ago
April 23, 1942
At a special meeting of the Phillips County High School Committee Saturday evening at the office of Mrs. Gladys Hofmeister, secretary. M.L. Wiley, superintendent of the high school at Hudson, was elected superintendent of the county high school system for the succeeding year. Mr. Wiley will succeed Robert A. Peterson, who recently submitted his resignation to the committee.
Phillips County’s quota of $500 for the United Service Organizations has been raised, the first county in the state to have reported that fact to state headquarters of the organization.
In particularly resplendent uniforms and notable for precision, the Holyoke High School band, directed by E.W. Hornish, on April 14 was awarded first place in marching in the parade on the Northeastern Division of the Rocky Mountain Instrumental Competition and Vocal Festival in Sterling.