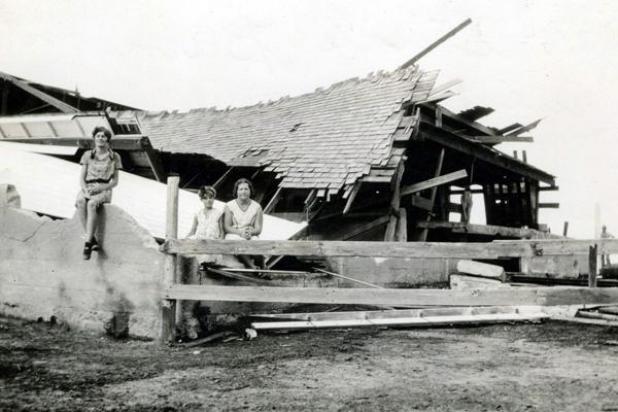 Everett A. Stickle’s barn is pictured after a tornado on Aug. 6, 1931. Everett and his wife Effie homesteaded in Phillips County in 1898. They traveled with their daughters Nora and Gladys by covered wagon to Phillips County from Washington, Kansas. The location of their homestead was 12 1/2 miles east and 6 miles south of Holyoke. — Source: Phillips County Museum

Enthusiasm for the anticipated distribution of Chromebooks for all students in grades 5-12 reached its crescendo last week when the long-talked-about and long-studied 1:1 device program for Holyoke School District became a reality.

The snow and ice removal process in town was blasted with concern at the Jan. 5 Holyoke City Council meeting. A letter signed by 14 area residents who either live or work in town cited concern for slick conditions and asked for a solution to keep streets safe in inclement weather.

Kimberley Woodhouse of Haxtun released her 10th book, “Beyond the Silence,” on Jan. 5.

As the first facility in Colorado to use AccuNurse, Regent Park Nursing and Rehab now has the latest technology and is already seeing improved quality of care for their patients with its use. AccuNurse is a system of voice-assisted care in which staff communicate with one another and with a computer base via personal headsets.

William Wailes, the brother of Marc and Gregg Wailes of Holyoke, will be inducted into the Colorado Agriculture Hall of Fame on Feb. 24 in Denver.

Janet (Krogmeier) Mitchell, a Holyoke native, has taken on duties as director of nursing services at Golden Ours Convalescent Home in Grant, Nebraska.

The Phillips County chapter of Pheasants Forever is celebrating its five-year anniversary.

Working on all kinds of boats in the U.S. Navy’s 7th Fleet in the mid-1950s spurred Bill Bradley Sr.’s interest and led to a full career in the auto body business. Putting in close to four decades in auto body repair work, along with other sideline operations, Bradley, 62, has anxiously anticipated his retirement, which he began Dec. 1.

Winter continues to hold its icy grip on the area. Nighttime readings have ranged from 17 degrees below zero to 19 degrees above, with daytime readings from a low 11 degrees to a high of 45 during the past week.

Tuesday and Thursday evenings have been designated for evening classes to be offered at Holyoke High School, under the joint auspices of the Holyoke School District and Northeastern Junior College. The 11 classes at Holyoke begin either Jan. 26 or Jan. 28.

Judge H.E. Munson gave his decision in favor of the Holyoke town council in the liquor license case which was heard in court here last week in which Art Claymon sought to require the town board to approve a liquor license for 1946 after the board had refused to do so.

The annual count of the elk that are in the state will be commenced this week. It will be made from an airplane. R.O. Brown, Alamosa, will fly the plane, and Norman Kramer of Denver will manipulate the counting machine. The plane will fly at an elevation of 75 feet from the ground. The roar of the propellers has a tendency to scare the elk. They always run in single-file so it is easy to count them. If they get used to the roar, the plane carries a siren that will make them get up and travel. In years gone by, it took 12 men 40 days to count the elk. Now it takes two men five days to do the same job, and the result is far more accurate.