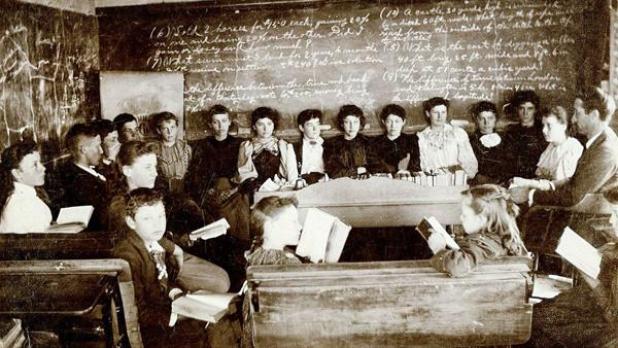 In 1894-95, District No. 3, District No. 72 and District No. 44 — also known as the Crater, Trego and Lownsbury schools — combined to have nine months of school rather than the usual three months. Instead of each district holding their own separate school at the same time, C.F. Parker was hired to teach three months in each district. The one-room Trego schoolhouse was located 1/2 mile west of the Trego homestead, northwest of Holyoke. Pictured in the District No. 3 Trego schoolhouse, from left, along the wall in the back, are Addie Porter (Hitt), Theodore Peter, Frank Sprague, Alva Trego, Grace Crater, Hattie Heller (Woodhams), Inez Ashley, Florence Trego (Kepler), Mettie Sprague (Chase), Susie Sprague (Clute), Rebecca Crater, Lula Crater, Clara Trego, Alice Trego and teacher C.F. Parker; and in front, Rebecca Heller (Austin), Emmet Trego, Ethel Heller (Utesler), Esther Crater and Ida Heller (Woodhams). — Source: Phillips County Museum

Five Years Ago — March 13, 2014
Dedicated service from longtime employees and recent retirees Gary Peintner and Denny Grauberger was highlighted at Grainland Cooperative’s annual meeting March 6. Peintner served 37 years for Amherst Cooperative Elevator Company and then Grainland Cooperative. He retired Dec. 31, 2013, as Grainland’s assistant manager. Grauberger was recognized for 27 years of service for Farmers Cooperative Elevator Company and then Grainland. He retired at the end of 2013 as Grainland’s feed mill manager in Haxtun.
Bank of Colorado recently announced the promotion of Brian Gales to branch manager of the Holyoke branch. Previously, Gales had been vice president of commercial lending and operations for the Holyoke Bank of Colorado branch for the last two and a half years.
While the official start of spring is not until March 20, people of all ages have been soaking up the sun, with temps reaching 74 degrees on both Sunday and Monday, March 9-10.

Ten Years Ago — March 12, 2009
Mike Smith Construction has landed the job of constructing the new storage garage that will be built just east of the City of Holyoke offices to replace the old garage damaged during high winds on Nov. 6, 2008.
In a few months, patients at Family Practice of Holyoke will be able to enjoy the view of a nice new aquarium as they sit in the waiting area. Brett and Josie Murray are donating the aquarium to MMH in memory of their infant son, Baby Ethan.
Harlan Gohl was honored at a retirement reception March 6 at MV Equipment in Holyoke. He has worked at the local John Deere dealership as a service technician for 36 years, since 1973.

Twenty-Five Years Ago — March 17, 1994
The investigation into the December 1993 Baldwin Chevrolet burglary is now being referred to as the “Energizer case” because it keeps going and going and going. Evidence continues to turn up, which allegedly links Rex Barker, 43, of Greeley, to a string of thefts in Colorado, Wyoming, Kansas, Nebraska, Arizona and Oklahoma. Barker operates an auction business in Greeley and allegedly sold stolen property through the auction.
Very Special Arts Colorado and the Holyoke Arts Council will present a touring art show in Holyoke from March 25-29 in the HHS commons area, in conjunction with the local Art Guild Show. This 20-piece exhibition of artwork is created by persons with a variety of disabilities.
After a 31-degree high was reported March 8, the temps steadily increased, with a high of 70 noted on March 14.

Fifty Years Ago — March 13, 1979
Dennis Harms recently purchased the Peterson Repair Shop from Merril Peterson. Harms was formerly with Schmidt Motor Supply, operating their machine shop. He will operate a machine shop and a truck and trailer repair shop.
In a letter from the alumni association of Colorado State College concerning names for CSC, over 20 names were suggested, with various motives — Colorado State University at Greeley or State University of Colorado at Greeley, among many others. In some of the suggestions there was an ever-present note of humor — the New University for Developmental Education (NUDE) — and perhaps the only noncontroversial name of the lot — the University of Southern Wyoming.
If the government doesn’t watch out, it’s liable to price itself right out of the postal business. Before long it will be cheaper for business firms, in some instances, to use the telephone. The increasing postal rates very likely will result in the general public corresponding less with friends and relatives.

Seventy-Five Years Ago — March 16, 1944
In the regular meeting of the Holyoke Cemetery Board on Monday night, the matter of providing water in sufficient amount to keep the grass and other vegetation in good condition in the Holyoke Cemetery was discussed, and the board decided to drill a new well. Another improvement decided for the cemetery is a cattle guard, as people have not previously had access to the cemetery by car when the caretaker was not on the grounds.
The Legion-Auxiliary War Rally program this Thursday night will be the first event held in the newly remodeled club rooms in the north section of the Legion building. After Highline Electric Association moved from the Legion building, a plan to remodel the rooms to make them suitable for club rooms for the American Legion and Auxiliary were perfected and construction work started.