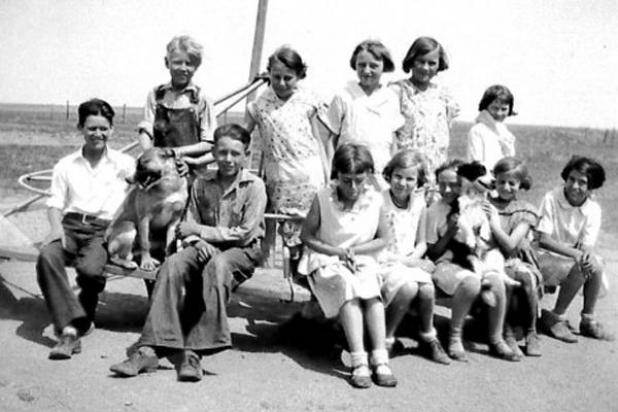 1932 — These children pose for a picture on an old merry-go-round. The photo is thought to have been taken in 1932, but the specific location where it was taken is unknown. Anyone who recognizes any of the children or has information about the location is encouraged to contact The Holyoke Enterprise at 970-854-2811 or editor@jpipapers.com.

Five Years Ago
April 5, 2012
Phillips County commissioners approved two conditional use permits for Williwaw Goddard Wind Farms LLC, as reported at their March 30 meeting.
Phillips County has teamed up with Logan County and has begun accepting electronics for recycling at the landfill west of Holyoke.
Gene Daise, a longtime Holyoke teacher and wrestling coach, has been named a recipient of the Lifetime Service to Wrestling award from the National Wrestling Hall of Fame.

Ten Years Ago
April 5, 2007
Jan Walter is retiring from Family Practice of Holyoke after nearly 26 years there. She began working for Dr. Chesnut in 1981 as a receptionist and has since made her place as a filing clerk, “chart-finder,” front office help and basically just a Jan-of-all-trades.
An organizational meeting for a Parent Teacher Association for Holyoke grades K-12 is planned for April 15.

Twenty-Five Years Ago
April 9, 1992
After waiting for more than a year, the City of Holyoke has finally received a reply from the State on the City’s request for stricter school crossing traffic regulations for Highway 385 near the elementary school. The answer is no.
Freshman pitcher Aaron Mosenteen pitched the first no-hitter in the short history of HHS baseball. This directly follows the first shutout performance in HHS history by Jeff Poe last week.
Designing a 10-gram balsa wood structure that held 132.5 pounds of weight earned a Holyoke sixth- and seventh-grade team first-place honors at the April 11 regional Odyssey of the Mind meet at Niwot High School. The students now qualify for the state OM tournament  April 25 in Denver.

Fifty Years Ago
April 6, 1967
James Dobyns, minister of the Holyoke Christian Church, submitted his resignation at a special meeting of the church board following the Sunday morning service. His resignation will be effective June 1, as he has accepted a call to go to Mount Vernon, Missouri, to help establish a new congregation.
Now in operation is a new ambulance which was recently delivered to the East Phillips County Hospital District board. The ambulance will be operated for the district by Lewis Funeral Home personnel and other Red Cross-trained individuals.
William C. Lakin, industrial arts teacher at HHS, was in attendance at a meeting of the Re-1J board of education Thursday evening and reported on proposed plans for the house which is to be constructed by the vocational woodworking class this summer. The board has been considering the purchase of approximately a block and a half of ground east of the football field, and it was reported that all details for the purchase of the ground from Albert Bahler had been worked out.

Seventy-Five Years Ago
April 9, 1942
Property taxpayers of Holyoke voiced disapproval of the proposed municipal liquefied natural gas system at the special election held Tuesday in connection with the regular town election.
A statement issued yesterday by the Phillips County War Board urged “farmers and landowners to think twice before burning crops or stubbles from their fields and to place realization in the fact that we are engaged in a war and that greater demands are being made on agriculture as the war advances.”
Mrs. Gladys Hofmeister, county superintendent of schools, announced yesterday afternoon that the Phillips County spelling contest, held annually during the month of May, will not be conducted this year. Decision to cancel the contest this year was made in view of the tire shortage and lack of interest manifest by teachers and pupils of the county.