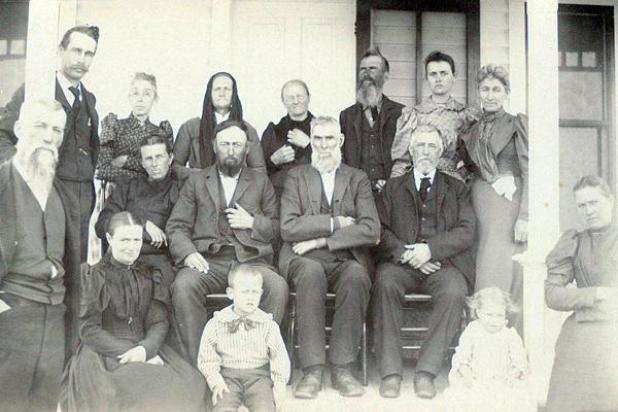 This photo shows a gathering at the Standard Sheep Company ranch on Thanksgiving Day in 1895. Those pictured include George and Emily Trego, Emmons and Harriet Ellis and children Ida and Daniel, Bertrand D. and Caroline Parker and son Cuthbert F. Parker, Alfred B. and Rebecca Clark, Freedom and Susan Sprague, Mollie Lownsbury and daughter Clara, and Margaretha Peter. Founded by James A. Reichelt of Chicago, Illinois, in 1892, the sheep ranch was located north of Holyoke. Reichelt persuaded sheep breeder B.D. Parker Sr. of Gardner, Illinois, to run the business. The Parkers left Illinois for health reasons — as Colorado was famed for its health-restoring qualities, no matter the ailment — and a large two-story house was built for them about 20 miles southwest of Julesburg. Reichelt’s son Hulbert Eri Reichelt lived on the ranch later after the Parkers had moved into Julesburg. — Source: Phillips County Museum

A mother-daughter duo has teamed up to bring Holyoke two new downtown businesses. The P Pod, a bakery owned by Anita Marlow, is located in the north half of 115 S. Interocean Ave. Marlow’s mom, Julie Haake, is the owner of a quilt shop called Creative Traditions in the other side of the building.

With chips of the Berlin Wall in their possession and a scrapbook of memories from when they obtained those chips 25 years ago, Erik and Michelle Vieselmeyer and Brad Gerk vividly recall their trip to the wall a month after it opened Nov. 9, 1989, unifying a city that had been divided for 28 years.

Encouraged by the activation of a local education foundation, Holyoke School Board members recently contemplated their approach for showing support for the foundation’s effort to pursue grant funds for a community track project on school grounds.

HHS freshman Rachel Schneider recently won a chance to meet Harrison Ford and got to fly as his co-pilot in Denver on Nov. 14.

New categories have been designated for the 1994 Christmas lighting contest, which is sponsored by the Holyoke Chamber of Commerce, City of Holyoke and The Holyoke Enterprise. This year, three $35 prizes will be given in each of two residential categories for exterior displays: lighting and decorative. A commercial category will feature one $35 prize.

Celebrating National Home Care Week, the personnel at Colorado Plains Home Care will host an open house at the local facility on Dec. 2. CPHC is housed at Sunset View housing complex No. 22.

Mrs. Helen McMillan, owner of Helen’s Beauty Salon in Holyoke, talked to the students of the Holyoke fifth grade last Monday morning about personal grooming and habits. She discussed the need to be “the kind of person that you would like to have around you.” She stressed the need for consistent care of bodily cleanliness on a daily routine.

Fire broke out in a coal bin at Foster Lumber Company yards here this Thursday morning about 9 a.m. Firemen responded promptly to the call and soon had several leads of hose playing water on the roof and sides of the long bin building on the east end of the yards. Flames leaped above the roof when the firemen arrived. They soon brought it under control. Manager Sid Rockwood estimated 35 tons of stoker coal in the bin and believes spontaneous combustion started the blaze.

To the record of being the longest continuous resident of Phillips County, S.S. Worley, formerly county judge 14 years, began using bifocal reading glasses this week at the age of 84 years. Most people begin using reading lenses near 48 years or younger, a reverse of Mr. Worley’s age figure.

In a recent statement made by Chester Bowles, administrator of war price and rationing through appointed boards, milk production has been increased and more people are drinking more milk than before the war, but butter production has declined. At the present time, butter is sufficient to supply each person with one-half pound of butter per week. Unless the decline is stopped, this amount will not be available in the future.