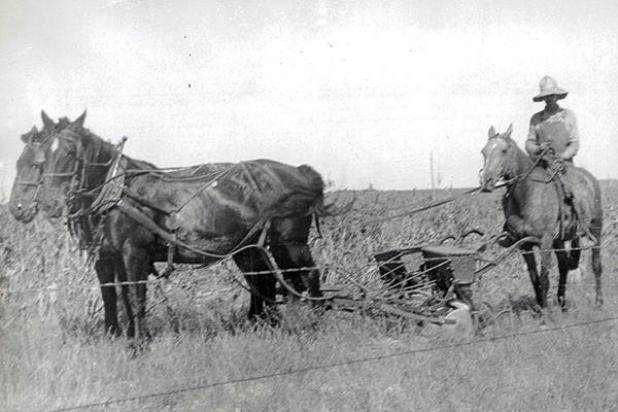 A team of horses is used to pull a pair of John Deere Van Brunt cornstalk drills in the early part of the 20th century. The horse-drawn seed planter could plant four rows in one pass. —Phillips County Museum

Five Years Ago
April 12, 2012
Holyoke City Council will begin to look into constructing a dog pound to help house stray dogs found in town. Discussion during the April 2 meeting got the ball rolling on a possible pound, which the City has discussed in the past.
Russell Sprague, a 1999 HHS graduate, is the newest partner at the newly renamed Colver, Killin & Sprague LLP.
HHS senior Mark Edmonds won his first national wrestling tournament championship when he was named champion in the April 7 Midwest Classic Nationals in Kearney, Nebraska.

Ten Years Ago
April 12, 2007
The White Butterfly Artists presented a total Japanese cultural program to Holyoke Elementary students April 5.
Adoption of a Force and Firearms policy for the Holyoke Police Department was approved unanimously by Holyoke City Council at its April 3 meeting. Main topics in the document include defining excessive force by officers, less lethal weapons and their uses, the discharge of firearms, approved department firearms and qualifications.
Haxtun Town Board members agreed April 2 to sell 405 acre-feet of water to Mid America Bio-Energy/Phillips to operate a proposed ethanol plant.

Twenty-Five Years Ago
April 16, 1992
Earning an overwhelming share of voter support in the April 7 city election, Frank Hubp has been chosen as Holyoke’s new mayor.
With 22 years of nursing experience at Melissa Memorial Hospital in Holyoke, Charla Berry was recently named director of nursing for the local health facility.
Families having babies at Melissa Memorial Hospital will now experience the birthing process in a more intimate, loving way afforded by new labor-delivery-recovery rooms in which all the stages take place in one setting.
The addition of three couples to the Pleasant Valley Ball Board has assured the rural ballpark of another season.

Fifty Years Ago
April 13, 1967
Vandalism and theft in Holyoke and the surrounding area, most of it apparently occurring Saturday night, have been reported by local authorities. The misdeeds were rather extensive, and it is theorized that several people were involved.
Firemen from Holyoke and other towns, aided by many volunteers, battled two grass fires in the dry sandhill grassland south of Holyoke during the weekend. No buildings, hay or livestock were lost, but the blazes swept across approximately 1,000 acres of grass.
Long-overdue rain began to fall in Holyoke at about 10:30 last night and was still going strong at midnight.
The Phillips County ASCS office moved to its new quarters in the courthouse annex (old hospital building), 115 W. Furry St., on March 25.
Colorado’s total cash farm income reached a record high of $878,191,000 in 1966, according to the Colorado Crop and Livestock Reporting Service.

Seventy-Five Years Ago
April 16, 1942
The clothing section of the war production board announced recently that arrangements have been made for the American Red Cross to act as a central agency in collecting from clothing stores throughout the country all wool clips that will become available by reason of the prohibition against cuffs on trousers for men and boys. Under the arrangements, the Red Cross headquarters in Washington, D.C., will advise the chapters throughout the country to collect the wool clips and dispose of them into channels for reprocessing into wool cloth for defense and essential civilian uses.
The Pleasant Valley rural school, District No. 5, will close the eight months’ term Friday, April 17. An epidemic of scarlet fever the past two weeks caused the board of education to make the decision to close the school at the end of the eight months.