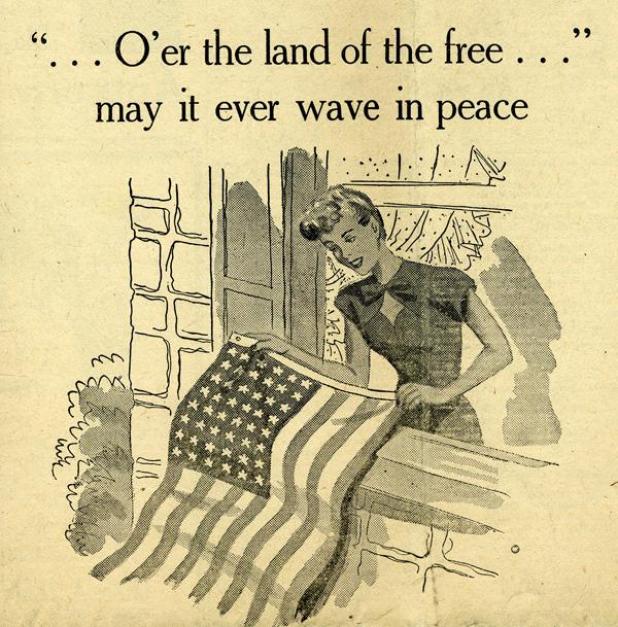 This drawing in the Aug. 16, 1945, edition of The Holyoke Enterprise encapsulates the feelings of relief and patriotism many Americans experienced after World War II ended and peace was finally realized.

It has been 75 years since the end of World War II. The war cost tens of millions of military and civilian lives, and perhaps one of the only silver linings of its occurrence is the fact that it eventually ended.

The Japanese attack on Pearl Harbor Dec. 7, 1941, marked the entry of the United States into the war. The U.S. waged war in the Pacific theater for years, attempting to shatter Japanese resistance. To that end, American planes dropped over 100,000 tons of explosives on more than 60 Japanese targets between March and July of 1945 alone.

On July 26, 1945, Allied leaders issued the Potsdam Declaration, which called on Japanese forces to surrender. If unconditional surrender did not occur, the declaration threatened, then Japan would face “prompt and utter destruction.” Japan refused to surrender.

On Aug. 6, 1945, a B-29 plane named Enola Gay dropped an atomic bomb on the Japanese city of Hiroshima. The bomb, named Little Boy, did far more damage than its name might suggest. It killed over 70,000 people and destroyed a 5-square-mile expanse of the city.

In a radio address made Aug. 15, 1945, Japanese emperor Hirohito announced his country’s surrender. The official surrender ceremony occurred Sept. 2, 1945, aboard the USS Missouri while it was anchored in Tokyo Bay. Both days became celebrated as “Victory over Japan Day” or “V-J Day.”

President Harry S. Truman and others in his administration justified the use of the atomic weapons by saying the attacks shortened the war. According to their projections at the time, an invasion of Japan would cost hundreds of thousands of additional American lives, and the war could have continued until at least the latter part of 1946.

The dropping of the two atomic bombs ended a conflict that lasted nearly six years and redefined the world. There was finally peace, and people throughout the country celebrated.

The Aug. 16, 1945, edition of The Holyoke Enterprise noted that when the news of the victory was announced, the “Holyoke siren sounded and stores began preparing to close for a holiday.” Residents were jubilant now that the war had finally ended, and in a “well balanced program of music, community singing and speaking, the historic event was observed appropriately and attended by about 200 people.” The Phillips County High school band also played, and all program attendees sang patriotic songs together.

Although the horrific war was over, the atomic bombs set the stage for the Cold War. A new phase of history was dawning, and the U.S. emerged as the world’s superpower. It was time to start the rebuilding and healing process.