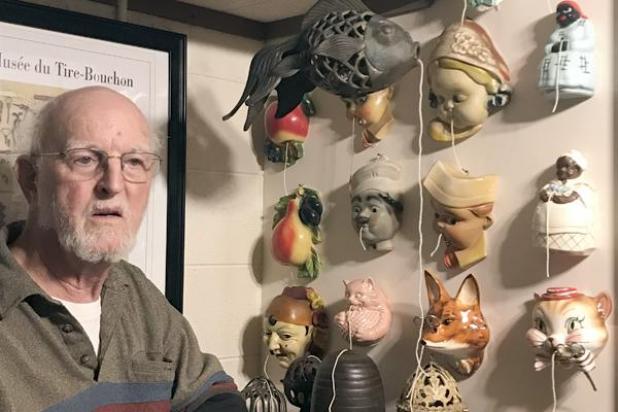 Chas Reynolds is pictured with some of his string holder collection. He has 25 string holders, and they house a ball of string behind their chalkware face or figure. The string was then cut to use to tie packages. — Jackie Reynolds 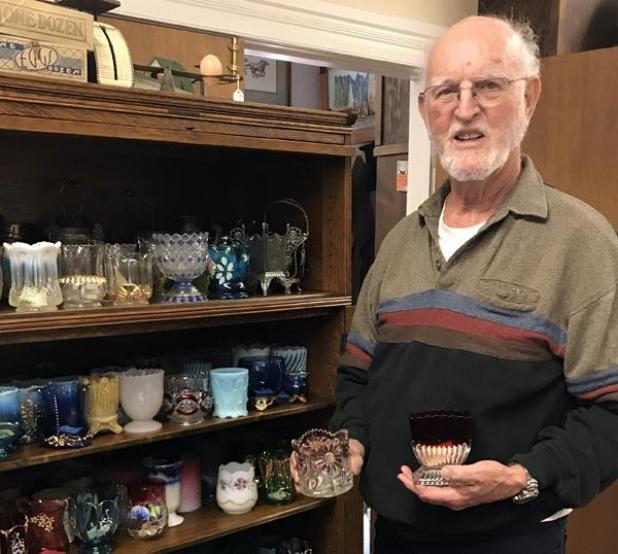 Chas Reynolds holds two of his close to 700 spooners in his collection. Original spooners were made from the 1840s to the 1920s. — Jackie Reynolds

Editor’s Note: This is part of a series about local residents and their unique collections.

Some people have one or two collections, or even a few. Chas Reynolds of Chas’ Accounting Service in Holyoke has 30 or so different collections.

When it comes to collecting, he has a wide range of interests. From seashells to pencils, from arrowheads to bottle openers, Reynolds just loves to collect.

Reynolds collects antique corkscrews, which he started keeping about 10 years ago during a trip to France. He visited a corkscrew museum there and began to look out for them ever since.

He has collected steins and mugs since 1973 when he was teaching school on a military base in Germany.

“I have an appreciation for craftsmen and tools and what they could do with those tools,” he said. “They were artists.”

He has most recently started collecting string holders. These are chalkware faces or figures that house a ball of string and can be mounted on a wall. The string can be pulled down out of the holder and cut. Reynolds said these were often used in stores to tie up packages before tape was readily available.

He has been collecting for over 60 years. He started out collecting coins. His parents operated a restaurant in Nebraska that was on a highway to Yellowstone. He worked as a cashier in the restaurant at a time when silver dollars were in circulation, and he remembers trying to talk customers out of their silver dollars when it came time to pay.

Reynolds grew up in a trailer behind his parents’ restaurant, and he said his limited space may have been the initial spark that got him into collecting.

“I couldn’t collect and have things,” he said, adding that at that time he was a self-described rock hound and he would have to polish the rocks he collected under the trailer.

While Reynolds acknowledged that his coin collection is likely his largest, he is mostly drawn to other historic and antique items because they have a certain sense of character that modern, mass-produced items lack.

He usually acquires the items in his collections at antique stores and auctions while traveling.

He told of a trip he took with his wife Jackie and two friends to Ohio, where they visited one of the largest antique stores in the country. They entered the store at 9:30 a.m. and left at 6 p.m., and they still hadn’t gotten through the whole store.

But that doesn’t mean they didn’t return with some good finds. Reynolds said they traveled with a pickup and a trailer. They quickly filled the pickup with antique furniture.

“When the trailer got full, we had to go home,” Reynolds said.

With so many collections, Reynolds said it’s difficult for him to pick a favorite piece.

“I have favorites in every collection,” he said, adding that he enjoys different aspects of each collection.

However, Reynolds said he does have a favorite collection, which has close to 700 pieces.

“Spooners are probably my favorite because I can display them and share them with people,” he said. “They’re fun to hunt for.”

Spooners are early American pattern glass pieces that are small, vase-like table setting pieces that hold spoons. Many original spooners were made in Ohio and Pennsylvania from the late 1840s to the 1920s.

Reynolds said that when Americans were migrating west in the mid-19th century, they would often leave their glass items behind because they would likely break in transit. This is why people see more spooners in the eastern part of the country.

He added that he typically chooses spooners based on their design or color, but originals are getting more difficult to find.

He pointed out that he recently visited an antique store in Nebraska, and the salesperson displayed the six spooners the store had available.

Reynolds said he eventually hopes to open a museum when he retires. He has a deep interest in history and genealogy and hopes to facilitate that interest in others by including his collection of northeast Colorado history books in the museum.

He said Jackie jokingly tells him that he’s obsessed with anything that has drawers. It could be that the drawers of his antique furniture could be used to display his collections when the time comes to open a museum.