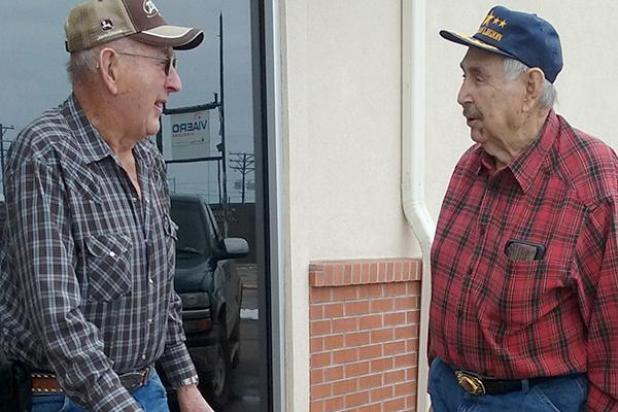 Brothers Ted Roos and Ken Jacobson, pictured from left, meet for the first time at J&L Cafe in Sterling last February. The two took a cheek swab DNA test at the restaurant that later proved their status as full brothers.

Roos connects with birth family more than 80 years after adoption

Ted Roos of Holyoke spent nearly all of his life wondering where he came from.
Having been taken in as a baby by his foster family, he never had the chance to meet his biological parents. His birth certificate was signed with a fake name, and there was no documentable history prior to his time as an infant at a state-run adoption agency in Denver.
DNA matching technology finally unraveled the mystery for Roos in 2018, when he found a full brother, Ken Jacobson, living just an hour away in Sterling.
Then came a second shock. Further matching revealed seven more biological siblings of Roos and his brother, all living in northeast Colorado and all unaware of the two’s existence.
The nine siblings are planning a reunion this summer. It will be the first time that the nine have ever met as a group.
For Roos, 88, and Jacobson, 86, their late-in-life meeting has been the surprise of a lifetime.
“I couldn’t have a better brother than the one I came up with,” Roos said. “I really couldn’t have asked for anything better.”
Jacobson — whose 22-year career in the military saw him stationed in England, France, Korea and Vietnam — said the only experience that compared to meeting his wife was meeting his brother.
“I’ve been all around the world, and I enjoyed it all. The best enjoyment I’ve ever had, though, is when I found my brother,” he said.
Today, the brothers meet regularly — whenever they pass through town, said Jacobson’s son, Jim.
“I don’t know if it’s because we’re related, but it’s just felt so natural,” he said of meeting Roos and his wife, Betty. “Aunty Betty and Uncle Ted are diamonds.”

Brothers grew up with no knowledge of birth parents
In 1931, after spending five weeks in a Denver orphanage, Roos’ foster family picked him up from Haxtun Hospital and took him home to Fairfield, north of Paoli.
He said that his adoptive parents, both of whom were Swedish, picked him in part because of the Scandinavian last name that was written on his birth certificate.
The name later turned out to be fake, and Roos joked that the recent testing showed only a small fraction of Scandinavian DNA.
Roos grew up with two sisters — one adopted and the other a natural child of his foster parents. He graduated from Haxtun High School and entered the U.S. Navy when he was 19 at the outset of the Korean War.
After three years, nine months and 21 days in the armed services, he returned to be with his wife and young son. He went on to raise grain and cattle, retiring from farming just a few years ago.
Jacobson was born in 1933 and adopted by a Nebraska family in 1935. He spent his childhood moving around the state, graduating from high school in Columbus, Nebraska, and went on to serve in the military at the same time and in the same part of the world as his brother.
Jacobson made a 22-year career in the Air Force and later settled in Colorado, working for an insurance company in Aurora before moving to Sterling.
Roos and Jacobson both entertained the idea that they could have seen each other before their 2018 meeting without ever realizing it.
“I would guess we did rub elbows at some point, because he’s been in business places that I’ve been in,” Roos said.
“It’s hard to say, but it’s possible,” Jacobson added. “I think there’s a good possibility that we saw our own parents and didn’t even know it.”
Jim Jacobson said that, even prior to 2018, he knew and had worked with individuals to whom he was related through his father. He had no idea of their relationship before the DNA tests.
“Half of those kids I’ve known for 25 or 30 years — ever since they’ve been out here. I just never knew we were related,” he said.

DNA testing connects the dots
In December 2017, Roos submitted a DNA sample to an online service. He said that he was contacted within a few weeks with the news that a relative had also submitted DNA.
“It all moved pretty fast,” Betty Roos said. “After the ball got rolling, it only took between eight or nine months to get the whole story.”
Jacobson had sent in his sample a few years before Roos. The first test indicated a high probability that they were related, but additional testing was needed to confirm that they were full siblings.
The children of the two organized their first meet-up in February 2018 at Sterling’s J&L Cafe.
Over a meal — the first time either had sat down with another member of their birth family — Roos said they talked about “a bit of everything,” including their shared time in the military.
They also took cheek swabs, which were sent to a lab to confirm that they were full siblings.
The brothers said they were both at home when they received the results of the test. Even though they knew there was a high likelihood that they were related, they said it took time for the news to sink in.
“I just couldn’t roll it over and comprehend it right away,” Jacobson said. “If that was as far as it got, we would have already been happy.”
But revelations about their birth family didn’t stop there. The same matching technology found seven more brothers and sisters living in northeast Colorado.
By extension, it allowed Roos and Jacobson to learn the identities of their parents.
The children and surviving siblings of both Roos and Jacobson have been supportive of the two. Although they wish they had learned about each other sooner so that more of their other relatives would have been alive to share in the discovery, they said that meeting one another has allowed them to rethink their past and identities as adoptees.
“That would have put the cream on the cake, but it’s nice just to have the cake,” Roos said.
“We came from a big family,” Jacobson said. “We just didn’t know it.”