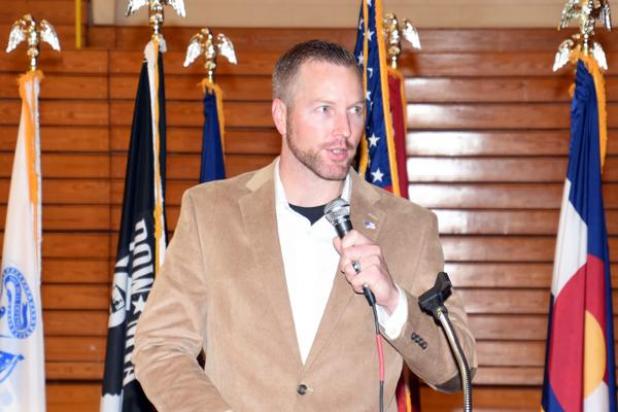 From soldier to warrior, Robbie Doman continues to inspire

Robbie Doman was the guest speaker for this year’s Holyoke High School Veterans Day program, and students from grades 4-12, as well as several community members were captivated as he shared his story Nov. 10.
In that very building in March 2001, Doman was a senior in high school and decided to enlist in the Army. He was scheduled to start basic training Sept. 18, 2001. “There wasn’t much of a terrorism threat at all at that time,” he said. Most of the people in the gym last Friday can’t even remember a time when that was true, but Doman explained that he had viewed the military as an option to pay for college. How quickly things changed.
The nation changed with the 9/11 attacks, but Doman’s commitment to his country did not. By September of the following year, he was deployed to Afghanistan. Later he served in Iraq, where in February 2008 he was injured in an improvised explosive device attack.
Though his injuries resulted in months of wheelchair use and 14 surgeries on his legs and back, Doman said he feels fortunate not to have been wounded worse. Now a veteran with lingering physical troubles, Doman wants to honor others who have made the ultimate sacrifice and to inspire other wounded warriors to do something more.
In July of this year, Doman competed on American Ninja Warrior. When the TV show premiered in 2009, it caught his eye and he thought, “I could probably do that.” At the time, he was still recovering from his injury, but he made up his mind to make it happen.
In the end, he accomplished his goal of encouraging other veterans. “It’s just pretty crazy how many people it inspired,” he told the audience.
Friday’s Veterans Day program also featured music by Sound Check and the high school wind ensemble, as well as taps played by Jillian Hunter.
Members of the National Honor Society presented Army, Navy, Marine Corps, Air Force, Coast Guard, POW/MIA, Colorado, VFW, American Legion and the American flags, and Steve Millage explained the significance of each.
Voice of Democracy speech winners Drew Stewart, Tayler Hale, Dylan Miles and Brenna Gatton were recognized at the program, and complete speeches can be found on page ??? of this edition of the Enterprise.
Junior high Patriot’s Pen essay contest winners were also announced. First place went to Erika Meakins of Haxtun, followed by Max Kleve, Ethan Schneller and Sabryn Burris, all of Holyoke.