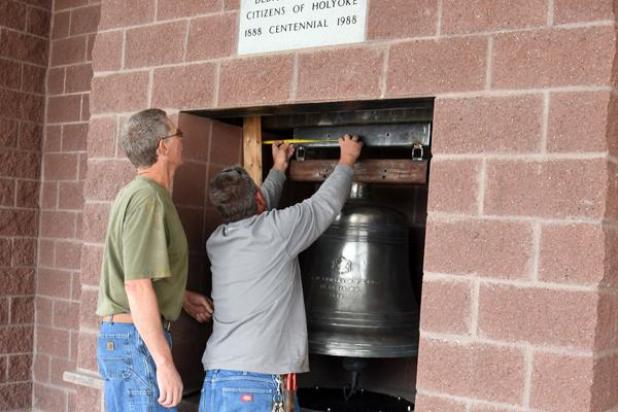 Jason Redman takes a measurement as he and Mark Brown re-install the bell at the City of Holyoke’s newly refurbished mini park. — Johnson Publications

The long process of designing and constructing the new Lions Club mini park at the intersection of Interocean Avenue and Denver Street is coming to an end. While the entire space is now fresh and new, the look is pulled together by a historic centerpiece that is well over 100 years old.
The bell was also featured at the former mini park at the same location. It was first added to that site when the City of Holyoke celebrated its centennial year. It was officially dedicated July 30, 1988. A sign dedicating the park to the citizens of Holyoke was also reused in the new design.
At the time of the centennial celebration, then-City Superintendent Allen Coyne researched the bell’s history, which was reported in the Enterprise Aug. 4, 1988.
It said that Fire Chief G.W. Garland asked the Town Board for a fire bell on April 17, 1890. The board contributed $75 toward the $160.06 bell. On June 12, 1890, a bell tower was erected at today’s 127 E. Denver St. The total cost of the project, including the bell, was $303.31. The bell was used to summon firemen until 1895 when a battery-powered siren was purchased.
On May 26, 1898, the board passed Ordinance No. 52, and the bell became Holyoke’s curfew bell. According to the ordinance, children under the age of 18 were not allowed to loaf, loiter or be in any public street, alley or public place after the hour of 8:30 p.m. from Aug. 1-May 1 and 9 p.m. from May 1-Aug. 1 unless accompanied by a parent, guardian or adult member of their family.
In the early 1920s, the bell was relocated to the top of the new power house at today’s 126 N. Baxter Ave. It was used for curfew at different times until 1955 when the power house went out of use.
The bell remained atop the old power house until 1974 when it was taken down and stored in the truck shed until City employees decided something should be done with the piece of history and it was moved to the mini park in 1988.
Current City Superintendent Mark Brown was instrumental in designing both the bell’s first display and the new one.
Also during the centennial celebration, citizens of Holyoke created a time capsule to be opened on the City’s 150th birthday in 2038. It was buried Aug. 26, 1988, with about 25 people in attendance for the occasion. Then-Mayor Larry Thompson and Bud Colver of the Centennial Commission placed the items in the container to be buried.
The capsule was sealed in concrete beneath the bell at the original mini park, and it has been placed again beneath the bell at its new location.
It contains historical items, signatures, centennial memorabilia, photos and videos, and notes from the 75th anniversary time capsule, as well. Centennial Commission chairman Gladys Baldwin said, “I charge you to remember the past, the struggles and hardships of our pioneer fathers — the years of wars, the times of depression — the good years and the bad years — and with your hearts and minds, with your eyes and hands, mold and build a city for the future.”
Brown took advantage of the time when the bell was being relocated to weigh it. It weighed in at a massive 720 pounds.
It is reported to measure 32 inches in diameter, be made of tin and copper from Banca and Chile, and have a tone of C. The bell was made in 1890 by L.M. Rumsey Manufacturing Company in St. Louis, Missouri. Its serial number is 706.