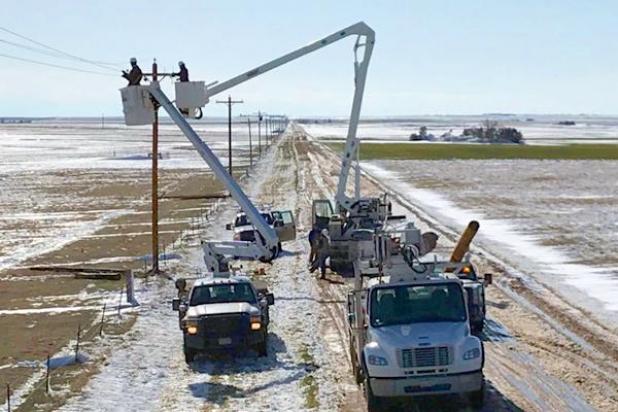 Highline Electric Association crews are out in full force Saturday, April 14, to rebuild power lines and restore power to rural residents. Matt Miller, at left, and Eric Luedke do work from the buckets south of Fleming as warmer temps quickly melt the snow. 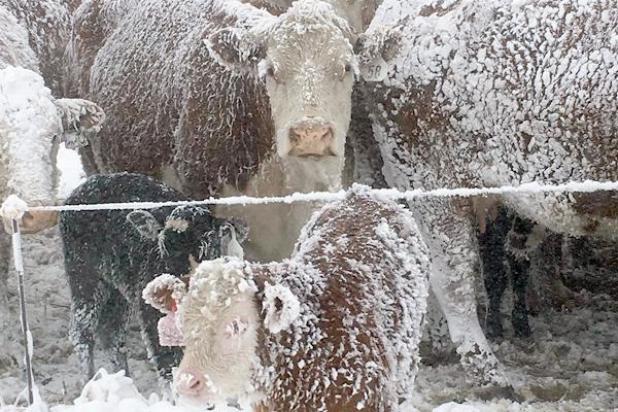 Power outages, strayed cattle and stranded motorists resulted from a zero-visibility Friday the 13th spring blizzard that roared into northeast Colorado Friday, April 13, and shut down the region.
All highways in Phillips County were closed or in the process of being closed by 2:45 p.m. Friday due to the drifting snow and high winds. It was more than 24 hours later before conditions improved enough that roads could be opened.
In anticipation of the storm forecast for Friday, Holyoke School District (and many surrounding districts) saw it coming and made the call on Thursday that there would be no school Friday.
Rainy weather Friday morning changed its weather tune just before noon when high winds from the northwest were accompanied by heavy snow for full-blown blizzard conditions.
The first power outage call in Holyoke came in about 1 p.m. Friday, according to City Superintendent Mark Brown. “We were losing fuses and breakers,” said Brown, noting that lines were slapping together, causing widespread outages throughout town.
Highline Electric Association crews were out in their several-county service territory Friday afternoon also. But visibility was so limited due to the blowing snow that they came in when it turned dark and resumed restoration of power efforts at 3 a.m. Saturday.
Phillips County Emergency Manager Bob Heldenbrand activated the Phillips County Emergency Operations Center at Phillips County Family Education at the fairgrounds in Holyoke at 7:30 a.m. Friday. With minimal staffing (only himself), he just began monitoring the storm and was in contact with his state partners.
At 2:16 p.m., when the county started to see incidents with bad roads and stranded motorists, he ramped up the EOC and called in an active support crew that stayed on duty until 1 a.m. Saturday.
With stranded motorists in Haxtun, a warming and overnight shelter was opened at Haxtun United Methodist Church. At most, 11 people were there, said Heldenbrand.
Friday morning, he said, 53 rooms were available in Holyoke among the three hotels/motels. By the end of the evening, they were down to four left. Arrangements were made with Holyoke High School and Holyoke Assembly of God Church if overnight accommodations were needed.
Utilities were of big concern to Heldenbrand and his crew. He ensured that Haxtun and Holyoke hospitals and nursing homes had generator power in case of outages.
Heldenbrand reported that there were no calls to vehicle accidents that required ambulance or fire department service in the county in last weekend’s storm.
At 9:10 p.m. Friday, Heldenbrand said, the region activated its emergency support function, pulling in a volunteer organization called Colorado 4x4 Rescue & Recovery. They deployed from the Front Range and were in Sterling by 11:30 p.m.
By that time, Phillips County had handled all stranded motorist issues. The rescue team did have 10 missions to handle in other neighboring counties, with only three that had to be aborted due to extreme road conditions. Heldenbrand said they extracted 14 people in Yuma and Washington counties.
Referencing snow totals, Heldenbrand acknowledged, “It’s hard to measure sideways snow. We definitely got the white-out they predicted.”

Cattle lost in blinding blizzard
In the midst of the raging blizzard, cattle were reportedly straying, driven by the fierce winds.
“It was just miserable conditions,” said Rick Krueger, adding that they couldn’t see 25 feet in front of them at their home near Amherst, northeast of Holyoke.
He said they were fortunate to find all their missing cattle Saturday morning, losing only one baby calf.
Keith Sagehorn said he lost a few calves but feels he was very fortunate. “For as bad as the storm was, it could have been a lot worse,” he added.
South of Paoli, into Yuma County, Rick Lett said Monday afternoon that they had found all but one calf that strayed in the storm.
He acknowledged that they’re pretty fortunate compared to some others in the area. While their cattle were only 2-3 miles from home, he said some others reported cattle straying as far as 15 miles.
Remembering well the devastating Blizzard of 1977, Lett said their cattle all had good protection this time. However, it snowed so hard that one group just walked away. They couldn’t get them turned back in the driving wind so had to let them go.
Lett said they actually picked up some calves and had a hard time figuring where they were due to poor visibility in the high wind and the fact that it was getting dark. “It’s a little unsettling when you get lost on your own property,” he added.
They went out again at daylight Saturday morning. He said probably 20 of their total of 200 got away, and they just got their last two calves back with their mamas Monday.
Meanwhile, at Brightwater Cattle Company (the former Bamford Feedlot) northwest of Haxtun, they had major loss of cattle in the storm, according to site manager Doug Scholten. He estimates they had a foot of snow at their site.

County opens numerous drifts
Phillips County Road and Bridge Manager Mike Salyards said his crews had to open quite a few drifts in the storm.
They were out both Friday and Saturday and finished up Sunday morning to make sure that everyone was able to get out. He acknowledged that a number of farmers/ranchers were looking for their cows.
With the size of some of the huge drifts, Salyards said he was surprised how much had melted by Tuesday. “It dried up faster than I thought it would,” he added, noting that the county roads are not in terrible shape.

City battles outages, snow removal
Friday afternoon, Brown reported the wind was blowing snow at about a 45-degree angle to the power lines. They rerouted some outage areas and got some others up, but the biggest problem areas were Johnson Street and Evans Avenue in the southeast corner of town.
Power lines were “galloping,” which wreaked havoc on getting power back and keeping it on. By 9-9:30 p.m. Friday, Brown said, the gallop went away and the lines were just swaying. As a result, they were able to get more people’s power to stay on.
City crews went home about 10:30 Friday evening, then started clearing streets Saturday morning around 5:30 a.m. while it was still snowing intermittently.
Brown said their biggest goal Saturday was to get every street passable. The wind was still blowing and snow was drifting, so they stopped later that morning.
By Sunday morning, the sun came out to enhance the snowmelt process. Brown said they cleared the main highways, then spread out the snow piles on the streets to facilitate melting.

Highline reports worst-hit area south of Haxtun, Fleming
At least 500 outages were reported by Highline Electric Association in its northeast Colorado/southwest Nebraska service territory in last weekend’s storm. HEA manager Mark Farnsworth said the worst-hit areas were south of Haxtun and Fleming.
While there were about 10 poles broken and numerous crossarms broken, most of the outages were caused by lines galloping, said Farnsworth. With ice on the lines, the wind slapped them together, and when they touched, the lines burned down.
Crews were out to restore power Friday afternoon, but visibility was so low due to blowing snow that they came in at dark. They went back out at 3 a.m. Saturday, and by 10 p.m., all HEA members but one had power. That member’s power was restored Sunday morning.
Farnsworth said they sincerely appreciate all the help they received from members assisting them with tractors and helping them get through the roads. And the words of appreciation shared through social media really meant a lot to the crews.
Work continued early in the week to clean up the damage, fix poles and return the system to normal.

Heldenbrand provides leadership at EOC
Heldenbrand had been part of a Thursday afternoon phone conference with the National Weather Service, Colorado Department of Transportation, and Colorado Division of Homeland Securities and Emergency Management to get an idea of the scope of the impending storm.
When he called in an active support crew at the Emergency Operations Center Friday afternoon, the crew included Melissa Memorial Hospital Emergency Management Services director Brady Ring; Brenda Heldenbrand for situational awareness; and Logan Zeiler and Keeya Marquez, who worked on public information monitoring and posting on social media.
Additionally, Jay Rains, with Holyoke EMS, was at the Phillips County Comm Center to gather information and feed it to the EOC crew so they didn’t have to bother the busy dispatchers.
Also working with the EOC as they were in and out of calls for service were Holyoke Police Chief Doug Bergstrom and Phillips County Sheriff Thom Elliott.
Dispatchers in the blizzard were of extreme importance to the communication and safety process. They included Comm Center director Kenny Gaskill, Jill Anderson, Brenda Brandt and Sara Kumm.
With no more stranded motorists on the highways, at 1 a.m. Saturday, the EOC went to virtual status and back to minimal staffing, and Heldenbrand was available by phone at his home.
John Durbin assisted EOC at the Comm Center from 6:30 a.m.-2 p.m. Saturday to relay info, and Ring returned to the EOC at 8:45 a.m. Saturday.
Heldenbrand’s mission focus starting at 9 a.m. Saturday was to identify where abandoned vehicles were located to facilitate getting them removed so CDOT could continue clearing the roads.
With the storm subsiding and travel ability resuming, Heldenbrand started to demobilize the EOC at 2 p.m. Saturday and deactivated it at 5 p.m.

EOC to continue monitoring
Heldenbrand emphasized that he won’t tear down the EOC completely, as he’ll be monitoring the predicted storm for this weekend.
The Phillips County Emergency Management Facebook page was a source of information during last weekend’s storm to monitor road closures and weather conditions in the area.
Heldenbrand said they also utilize Twitter. Anything posted there automatically rolls over to their Facebook page, and he encourages residents to utilize this as a source for information.
Additionally, Heldenbrand said they’ve started to build a roster of people who can be called in to assist with the EOC. They would like volunteers who aren’t already involved in emergency responsibilities.
Those interested in being considered for the EOC roster should email Heldenbrand at bob.heldenbrand@phillipscounty.co.