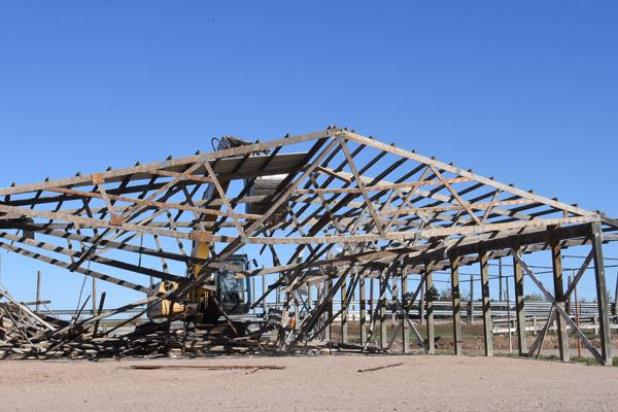 The sale ring at the Phillips County Fairgrounds gets torn down in the early stages of preparing the site for the new Pavilion and Education Center that is to be built in the coming year to be ready for the 2018 fair. — Johnson Publications 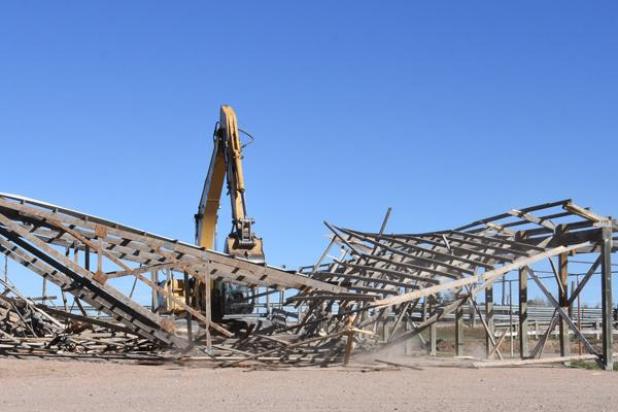 There one minute; gone the next

Progress on the Phillips County Fairgrounds Pavilion and Education Center has been ongoing for over a year. Plans have been drawn up, grants written, funds raised. As of Oct. 24, however, development has become suddenly more tangible.
Phillips County Board of Commissioners reported on that and several other actions taken throughout the month at its Oct. 31 meeting.
The pictured sale ring is one of several old buildings being demolished to make way for the new structure. Also already razed were the west beef barn and the horse barn. The hog/sheep building and the grooming shed will be disassembled and erected later for other County uses. Bids are being taken for the scale house, and it will soon be moved.
The County intends to spend this fall and winter preparing the site for construction. Phillips County Administrator Randy Schafer reported that an estimated 300 loads of soil will need to be hauled in to level the site.
During that time, they will be taking bids for the building as well as the contractor. Depending on weather, the County expects construction to take place from March to mid-July and for the pavilion to be ready for the 2018 Phillips County Fair. The space will include a large arena and pens for all the animal species shown at the fair.
Schafer noted that back-up plans are being made to accommodate next year’s fair should construction be delayed.

Courthouse updates continue
While the east courthouse parking lot has been closed for construction for the past couple months, the Americans with Disabilities Act requires that handicap parking be available for the November 2017 election. Commissioners decided to fill potholes and erect handicap signs for three spaces to be in compliance.
The parking for handicapped individuals and law enforcement is temporary, and no other parking will be allowed there until the construction project is finished.
Additionally, Black Hills Energy has proposed changing the natural piping to the courthouse, communications center and maintenance garage. To complete the process, commissioners also solicited a bid from Precision Plumbing for completion of the piping for each of the hookups inside the buildings. The board approved the Black Hills cost, not to exceed $2,000, and the Precision Plumbing estimate of $7,065 to complete the project.

Budget requests presented
Representatives from both Phillips County Economic Development and Baby Bear Hugs presented budget requests to commissioners in October.
PCED executive director Julia Biesemeier noted her excitement about the economic growth in the county and shared some of the organization’s upcoming developments. The 2018 budget request for PCED is the same as that from 2017. Biesemeier also reported that she will be leaving her position as executive director.
Ruth Seedorf, Pam Gibbs and Jennifer Deam presented the 2018 budget and shared some of the programs Baby Bear Hugs offers, including Cavity Free at Three, Partners for a Healthy Baby, Ages and Stages Screening, Nurturing Parenting classes, Healthy Living, SafeCare Colorado and Nurse Family Partnership.

Vehicles purchased
Last month, the County purchased two vehicles. County road and bridge supervisor Mike Salyards gave several quotes to the board for used tractor trucks. Upon review and discussion, commissioners approved the purchase of a 2014 Kenworth truck from MHC for $74,950. The County will trade its 2009 Mack truck for $24,000, leaving a net cost of $50,950.
The board also approved the purchase of a 2008 Ford E350 van from Bonanza Ford for $13,000. The van will be for use by the Phillips County 4-H program in accordance with a memorandum of understanding signed Jan. 23, 2017. The County will maintain ownership and provide insurance, but its primary use will be the 4-H program. The 4-H Council has completed a fundraising campaign and will reimburse the County for the cost of the vehicle.

Other business
In other business in the month of October, commissioners:
—Met with Garry Kramer and several members of the Pleasant Valley community, who reported that the Pleasant Valley Ball Club had been dissolved. According to the original deed to the club, the land would revert to the original grantors and the building would go to Phillips County. Commissioners sought the opinion of those in attendance and elected to convey the 24-foot-by-48-foot Behlen metal building to the Wayne Martin heirs.
—Approved a request from County Assessor Doug Kamery to hire Sherman Kage as a personal property/deed transfer clerk in the assessor’s office. Kage began Nov. 1, replacing Heather Meakins, who previously held the position.
—Heard from landfill supervisor Bill Andrews that he plans to apply for a grant, not to exceed $25,000, from the Colorado Department of Public Health and Environment. The application will include purchasing four cardboard trailers and two roll-off boxes with covers to be used in County cardboard and plastic recycling programs.
—Met with Kathy Secrist, director of the mobile pantry and food bank, and signed a memorandum of understanding with Food Bank of the Rockies, allowing use of the Event Center for 2018 monthly distribution.
—Denied a request for a new road to be built on a section line to be maintained for private use.
—Appointed Julianne Kramer to a three-year term on the fair board. Her term will end Aug. 31, 2020.
—Approved a request from County Clerk Beth Zilla to hire Gay McDaniel and Cathy Sullivan in temporary part-time positions as election judges.