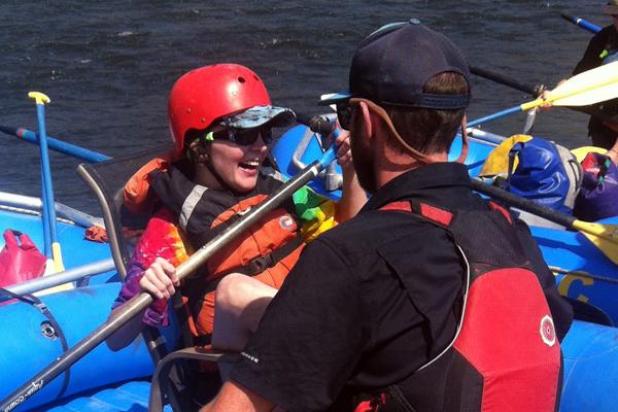 Brittney Ferguson receives a few tips for successful paddling before her group sets out for some rafting. 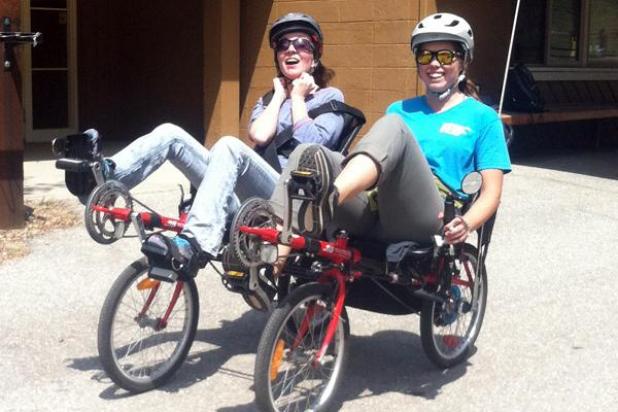 Brittney Ferguson, at left, participates in one of the many activities at a Challenge by Choice camp.

Traveling with Brittney the Intrepid

Life has plenty of built-in challenges for people who have sustained traumatic brain injuries. Some encounter memory loss or have slowed reaction times. Perhaps speaking, eating or walking has become a challenge. Though every TBI is different, facing some sort of a challenge afterward is pretty much a given. And there’s no choice in the matter.
That’s part of what makes Challenge by Choice so remarkable. Each summer, adults with TBIs have the unique opportunity to embrace a different kind of challenge and have a good time doing it. The Challenge by Choice camps are put on by the Brain Injury Alliance of Colorado and are held at the Breckenridge Outdoor Education Center. While they stay in a beautiful mountain lodge next to the Sawmill Reservoir, campers spend the week rafting, bike riding, ziplining and more.
Brittney Ferguson recently made the trip from her home in Holyoke to attend the Aug. 12-17 camp (and I was lucky enough to go along as her buddy for the week).
Each camp has about a dozen participants who have sustained brain injuries in the past, and they run the gamut in every regard possible. Some have been coping with a TBI for decades; others have had their’s for just about a year. There are people that appear physically unaffected and those who depend on a wheelchair every day. There are chatterboxes, those who are slow to speak and some who are nonverbal entirely.
And of course, each individual goes to camp with their own unique background and interests.
In addition to the campers, there are a handful of BOEC staff and several interns there who run the camps. There are also volunteers — ideally enough for each camper to have their own buddy for the week. Brittney is in the minority in that regard. Each of the three times she’s been to camp, she’s had a buddy she already knew. It was her sister, Amanda Parrish, who accompanied her to camp first.
Other campers are paired up with a volunteer whom they typically haven’t met before the first day of camp. Some volunteers are people who sustained TBIs themselves at some point. At the recent camp, there were three volunteers who are studying to be occupational therapists and learned about the opportunity through their program. Others have simply fallen in love with Challenge by Choice and have been volunteering for years.
On every level — staff, interns, volunteers, campers — people come from all over the country to be a part of the experience. And even those who aren’t present for the camp itself — family, friends, caregivers — have some insight into the effects of the program.
In Brittney’s case, it’s her parents, Rance and Connie, who care for her in day-to-day life, and one can only imagine what it’s like for them to entrust their daughter to the week-long program that, by definition, includes some risky activities. However, the number of campers who return year after year would suggest that it’s a worthwhile program. As Connie said, “It’s a great opportunity for her, and I know she has a great time and works really hard while she’s there.”