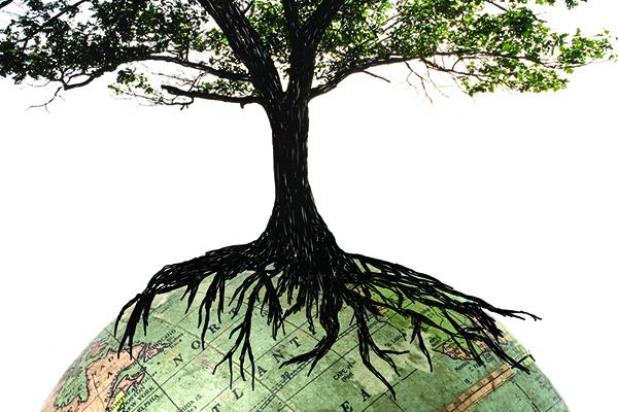 Where in the world do I come from?

The good, the bad and the ugly of unearthing genetic secrets
Darci Tomky, The Holyoke Enterprise

She gets her blue eyes from her mom. He inherited his height from his dad. And those red-haired siblings, that trait comes from their grandma’s side of the family.
People can make observations all they want. They can fill out family trees 10 generations long. They can dig up records from Ellis Island and, dare we say, family burial plots. But there’s still that question in the back of their minds: “Where in the world do I come from?”
Now, that question is getting easier and easier to answer. Curiosity won out for an estimated 12 million Americans (a growing number) who have purchased direct-to-consumer genetic DNA testing kits.
All it takes is a little saliva — and a little cash, too — for companies like AncestryDNA and 23andMe to analyze participants’ DNA and send back a report with findings such as the geographic regions ancestors came from, names of possible distant relatives and even genetic health risks.
But take caution. It might not be the perfect solution for everyone. Just like family histories, there is a good, bad and ugly side of genetic DNA testing.

DNA offers answers for adopted woman
While there are certainly plenty of stories floating around about how genetic DNA testing has uncovered family scandals — one girl’s dad isn’t really her dad, a sibling isn’t really a sibling at all — it can also solve some unanswered questions for those who were adopted or who have uncertain family histories.
For Amy Marner, who was adopted from Korea, she simply wanted to use the testing kit to find her ethnicity. Now with a husband, a son and a daughter of her own in Holyoke, she feels “whole” and doesn’t feel like she needed the test to unearth any secrets.
“You can be disappointed if you have expectations,” she said. “I had no expectations.”
Last fall, Amy’s husband Cory bought her a test kit from CRI Genetics. With curiosity about Cory’s geneology as well, the couple decided to have their daughter Hannah take the test.
It was clear the Asian heritage came from Amy’s side. Vietnamese was the top ethnicity, and Japanese, Chinese and Indian were also included. Amy said Korea is a lot like America in that it was a melting pot as nations migrated around the continent. Even in her own family, her four adopted, nonrelated siblings who were also from Korea had much bigger eyes compared to Amy’s small eyes. Their genetic DNA tests would probably look a bit different than Amy’s.
As for Cory’s results, it was no surprise that the blonde-haired, green-eyed man had some European heritage. However, the test showed South American heritage as well, which also made sense because his mom claimed to have Native American genes and other family members had much darker traits than Cory.
“Who are we really?” asked Amy. For someone who believes in a Bible-based timeline, the Earth is roughly 6,000 years old, and that means there has been 6,000 years of wars, migration and blending of ethnicities, she said. “We don’t really know who we are,” concluded Amy. And she’s OK with that.

Holyoke couple sees both sides of the same genetic DNA testing coin
After Steve and Cherrie Brown sent off their saliva tubes to be tested by AncestryDNA and 23andMe three years ago, they didn’t realize just how different their views of genetic DNA testing would become.
Steve has been very interested in his family tree, a feature offered at ancestry.com that has been worth exploring for him. While his relatives in the Holyoke area have been a tight-knit group on his grandmother Grace O’Neal’s side, other branches of his family heritage have been a bit more of a mystery.
Steve’s results “were not a big shock.” They confirmed that he was English, German and Irish.
The fun thing for him was the chance to connect with the possible relatives that AncestryDNA matched him up with. “We know we have DNA in common, but we don’t know how we are actually related,” he said.
Steve connected with one cousin in eastern Nebraska by email. Not really sure what to expect from the connection, he was thrilled to get a digital photo sent to him within 30 minutes. The photo was special because it was of his great-grandparents — two people he had never met before in a picture he had never seen before. The now-cherished wedding photo was a very special day for Steve’s great-grandfather Edgar Sturgeon Brown, age 25, who married Nellie Geneva Beedle in Sidney, Iowa, on Feb. 19, 1913.
While AncestryDNA had a family tree focus, Steve said 23andMe has a definite medical emphasis — for those who are willing to pay extra for it, of course. They are continually building their medical database, he said. To this day, he is still getting follow-up emails from 23andMe asking him everything from how tall he is to whether or not he can curl his tongue.