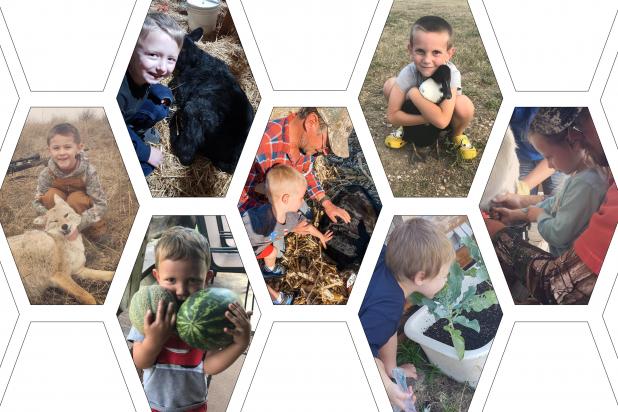 Learn from 4 local women who don’t put all their eggs — or meat or dairy or produce — in one basket
Jes-c French, The Holyoke Enterprise

Even brief or far-off disruptions to food supply chains can make people pause and consider their own dependence on others for the very sustenance they need to survive. Wondering where food will come from if worse comes to worst can be a scary thought, but four local women share how their families have taken food supply into their own hands. And they’re not who you might think.

They aren’t wizened grandmas raised by survivors of the Great Depression. They’re millennials, and they’re deeply in touch with the practically bygone practice of raising their own food.

Brittany Daniel and her husband, Dylon, love working for their survival and want their children, Brodyn, 6, and Dawsyn, 4, to learn first hand how to live off the land. Daniel explained that even at a young age, her children are learning the art of animal husbandry and how to care for God’s creatures. They already know that it takes hard work to feed themselves.

Katie Kramer married into a family that has raised cattle for several generations. Her husband, Chad, is a cattleman and a farmer himself, and it didn’t take long for Kramer to adopt the lifestyle as well. “I never gardened before moving to Holyoke, but after seeing my cousin’s garden, I wanted to give it a try,” she said.

Their children, Wes, 6, and Bryce, 4, are already at home in the garden and at the feedlot, learning some of the ins and outs of where food comes from.

Briana Worley and her husband, Brenden, routinely have a freezer stocked full of meat from various local sources. Every year, her father fattens steers, and Worley puts up a quarter of one in the freezer. For the couple and their 2-year-old son, Bryce, that beef lasts an entire year. They also hunt deer, and sometimes they are lucky enough to put two in the freezer in one season. Not only do they get to share in a sport that they both enjoy, but hunting also puts meat on their table.

Alison Fust sees raising her own food as a hobby centered on family and friends. “It is an opportunity to be together, work together, learn together and enjoy ourselves,” she said. She and her husband, Evan, along with their children, Bode, 7, and Miller, 5, not only raise some of their own food but also trade their excess with neighbors for other meats, fruits and fresh milk, bringing a sort of bartering into play.

“It provides an opportunity to be neighborly by sharing items and taking a few minutes to stop by and have conversation with friends,” she said.

It’s clear just from speaking to these four women that there are numerous avenues for acquiring food outside of the traditional grocery store. Some raise livestock on a small scale. For others, it’s their business. Sometimes meat is purchased from another local producer. There’s also hunting and fishing. Produce may come from fruit trees or vegetable gardens. Many also grow sweet corn in the fields. And don’t forget animal byproducts. Goats and cows provide milk, and chickens and ducks provide eggs.

And just as the sources are varied, the food itself is quite diverse.

The Kramers have their own cattle butchered for themselves and others several times a year, but they buy hogs locally as well.

In the Daniel family, they hunt turkeys, doves, deer, elk and bears.

The Fusts raise meat birds, including geese, ducks and turkeys, which they process once a year.

Across their collective gardens, these women and their families grow just about every vegetable you can imagine.

Then, of course, there’s the processing and preservation of the food to consider as well. These families store it up to eat year-round. Fust, in particular, enjoys canning or freezing the fruits and vegetables that they grow.

“You get a sense of gratitude when you hear all the lids pop after being in the water bath and then again when you open the jar to enjoy what’s inside,” she said.

When it comes to animals, Daniel encourages others not to be afraid of learning to process their own meat. “You can easily lose the money you were trying to save if you don’t butcher your own meat,” she said.

Raising food, be it crops or livestock, certainly isn’t without its challenges. It takes time, and it can be intimidating for those who are new to it. Even those with plenty of experience sometimes face setbacks.

“We are extremely lucky to live in a country that has a high level for food security and safety, and that should never be taken for granted,” Fust said. She recognizes that, although it’s nice to grow their own food, it’s not essential to their survival.

Last year, for example, a hailstorm wiped out a large portion of her vegetables. While it was certainly disappointing, the loss was not devastating. Her family wasn’t relying on that food for survival through the winter.

“What we do is a hobby,” Fust said. “If everything were to fail, we would be perfectly fine, and that fact is huge.”

Knowing that there is a fallback may help newcomers ease into the idea of raising their own food.

Kramer, who is still relatively new to gardening, started small. About six years ago she started with just tomatoes and strawberries. As her comfort level increased, she began branching out. “Now I plant quite a variety, and I enjoy trying new plants,” she said.

Daniel, whose family does rely heavily on the food they raise, readily admits that things don’t always go according to plan.

Nevertheless, she encourages others to learn from such setbacks, laugh it off, and seek advice from mentors. And to the parents out there, she suggests this: “Let your children see you fail and do it with grace.” They can learn from their parents’ mistakes too.