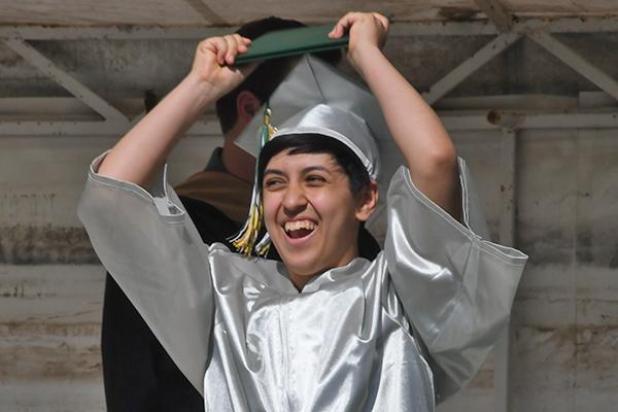 Alondra Zapata waves her diploma in the air, celebrating the graduation of the Holyoke High School class of 2020. — The Holyoke Enterprise | Johnson Publications

A month later than expected, the Holyoke High School class of 2020 graduated, and the resounding theme of the event was resilience in the face of adversity. The June 21 ceremony held on the HHS football field did, of course, follow a disrupted senior year in which classes were taken online in the midst of a global pandemic.

Many of the class’s usual springtime traditions were either canceled or modified to practice safe social distancing, but as co-valedictorian Shianne Willmon said, “If anybody knows how to get back up when life throws a punch, it’s the class of 2020.”

Acknowledging teachers, coaches, community members and parents, co-valedictorian Josie Herman said, “If only we can follow the examples of our mentors, none of life’s challenges will be too great to overcome.”

Both Herman and Willmon completed their time at HHS with a 4.0 GPA, giving them the distinction of being class valedictorians. Also honored at Sunday’s ceremony were Citizenship Award winners Lauren Bergner and Seth Watson for demonstrating intentional selflessness.

In presenting the class of 2020, principal Shane Walkinshaw said, “What resilience you have shown since March when the world was tipped on its head.”

He encouraged the graduates to continue to overcome fears, learn from failures, be bold and courageous, and stay amazing.

School counselor Angela Powell similarly acknowledged the unusual year faced by the class of 2020. “Was it hard? Yes. Was it frustrating? Yes. Was it heartbreaking? Yes.”

Nevertheless, she encouraged the graduates to never let such hardships break their spirits.

Diplomas were presented to the 45 members of the class of 2020 by Powell and school board members Dusty Sprague and Brady Ring. After crossing the stage, graduates gave sunflowers to their loved ones in a special ceremony.

Willmon returned to the stage to address her peers as class president. She let the rest of the crowd in on the background of one of the class of 2020’s idiosyncracies, too.

During their senior year, she explained, Seth Watson started saying “love you, bye” to classmates, teachers and janitors. Before long, the entire senior class had replaced “see you later” with “love you, bye.”

It means just a little bit more than a traditional goodbye to the classmates who have shared so much over the years. As they prepared to enter the next chapter of their lives and go their separate ways, Willmon offered up one final “love you, bye.”