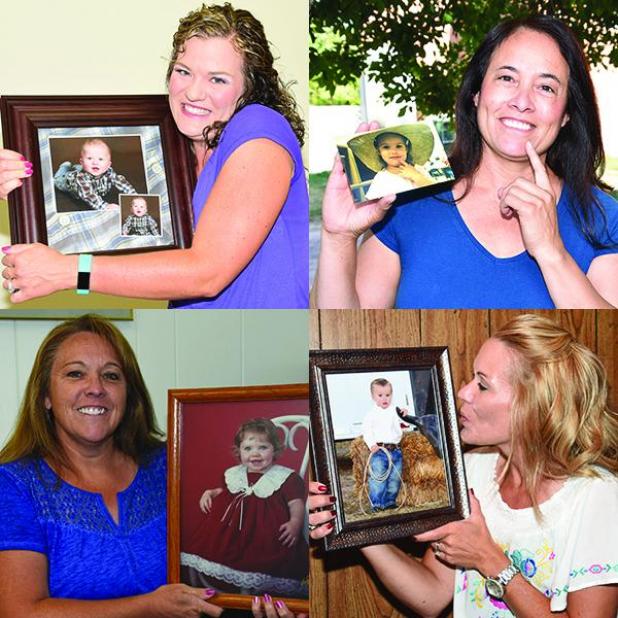 Mothers sending their children to the next step in school hold their little students’ baby pictures close. Pictured clockwise from top left, Ashley Clayton and son Levi, who is entering kindergarten; Letty Penzing and daughter Juana, who will start at Purdue University; Tracy Steggs and son Bo, who is entering kindergarten; and Brenda Krueger and daughter Tara, who will start at Colorado State University. — Johnson Publications

A bit bigger than baby steps

For mothers everywhere, those baby steps are getting a bit bigger as their little ones prepare for their first days of school. Whether launching into kindergarten or college, it’s a similar story.
“It’ll be an adjustment,” said Brenda Krueger, whose only child, Tara, will start at Colorado State University in Fort Collins in the fall. Working in the Holyoke School District administrative office, Brenda said she’s been fortunate to always be right next door, able to see her daughter for a minute whenever she wanted.
“It’s going to be quiet around the house during the days,” echoed Tracy Steggs, whose youngest, Bo, will be entering kindergarten this year. “I think that’ll be the biggest adjustment.”
Ashley Clayton’s oldest son, Levi, is about to start his first full days of school with kindergarten as well. “It’ll be a huge adjustment for his little brother, as he has always had Levi at daycare with him,” she said, adding that perhaps his 2-year-old brother will be happy not to be bossed around all day by the 5-year-old.
Clayton also admitted to being a little nervous, realizing the whole family will have to learn the ins and outs of school life together with their first-born. “I can’t believe how time flies.”
Is it easier to launch a child if you’ve done it before? Not at all, according to Letty Penzing, who is sending her third child, Juana, out into the real world next month. Juana is headed a little further away, to Purdue University in Indiana. “Every child is very close to you in a different way,” said Letty. “It’s like a finger on your hand.”
There is a lot to learn for parents and children alike, whether the student is going to their first full day of kindergarten or their first experience living away from home.
“It’s very overwhelming at first for a parent,” said Brenda Krueger. At CSU’s freshman orientation, students were made to register for classes by themselves while parents were addressed separately about more administrative information. “They kept reminding us that they are adults now.” She said all the information at the orientation helped set her at ease.
Summer transition programs have been helpful for littler students as well. “Kindergarten round-up day and testing day got Levi used to the idea, and now he is chomping at the bit for it to start,” said Ashley Clayton.
For those with older siblings where they’re going, some children are getting more information and guidance than they need. “His three siblings keep giving him pointers about elementary school,” laughed Tracy Steggs. “I keep saying, you have to let Bo make his own judgment calls!”

Read the full story and many others FREE in the 2017 Back to School special e-Edition!