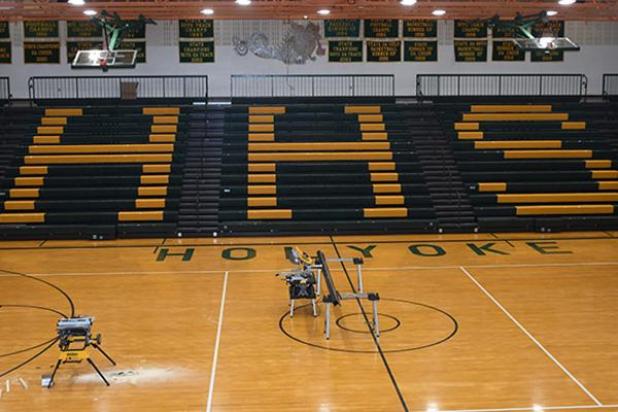 Dragon fans are in for a nice surprise in the renovation project of the main gym at Holyoke High School. The bleachers portion of the project was completed early this week. Both sides of the bleachers feature gold seats, spelling out HHS amidst the green seats. — The Holyoke Enterprise | Johnson Publications 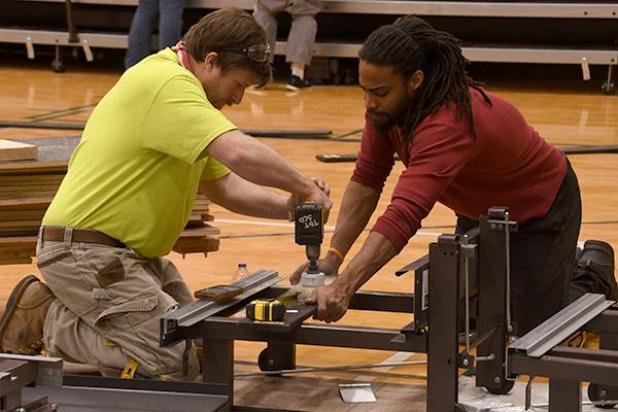 With high praise for The Big Top Seating Company that has been handling the bleachers portion of the gym renovation at Holyoke High School, Superintendent Kyle Stumpf reported at the Feb. 10 school board meeting that the project is moving quickly.

Bleacher installation was expected to be completed by Monday, Feb. 15, with the gym floor renovation next up on the project list.

Strips of flooring right next to the walls on both the home and visitor sides were sanded and stained prior to bleacher installation, and the rest of the flooring portion of the project began in earnest this week.

Special seats in both the home and visitor bleachers are color coordinated to spell out HHS in gold seats surrounded by green seats for a nice touch to the new look in the gym.

Stumpf said they have had positive feedback on the bleachers, specifically about the handrails and shorter steps for the aisles.

The Big Top Seating Company owners Erik Lee and Amanda Fischer gave a huge shout-out of thanks to the school’s ag and weightlifting class students who helped carry out the demolished materials.

They said that saved a considerable amount of their time. They cited Wendy Trevizo, in particular, for her effort in the project.

Members of the high school FFA chapter took some of the lumber from the old bleachers to use for projects, and the rest is being stored.

Principal Angela Powell said they have close to 100 20-foot sections that they’re offering to the community.

She said they’re packing the sections in fours, asking for a $100 donation to the project for each package. Powell has a list of 22 who are interested in bundles, so they’re close to selling all 25 bundles of the old bleacher seats.

Additionally, there are some shorter bundles from the stairs, but they’re not in as good of shape, she noted.

Stumpf shared a design of the new gym floor, complete with four sponsor logos. He noted that another sponsor has expressed interest in having a logo on the pads on the walls behind the baskets.

Notes will be going home with students with information about donating to be part of a donor wall for the newly renovated gym.

Stumpf said the Howell/Wold design build team for the school’s Building Excellent Schools Today project has looked at some ideas for the gym’s donor wall. One suggestion is for different colors in a Dragon tail to represent various levels of donors.

Donations for the gym renovation project will be taken well into next fall, Stumpf said. The walking track will be the very last thing to be completed, with target date set for August or even early September.

Meanwhile, the rest of the project still looks to be on target for an early-March completion date. Stumpf emphasized that it’s dependent on the efficiency of the flooring crew in the next phase of the project. He also mentioned that the scoreboard should be in this week.

While it isn’t part of the project plan at this point, Stumpf said he has obtained three quotes to paint the gym ceiling. Once the full renovation is seen, Stumpf said he thinks the orange ceiling beams will really stand out as an eyesore.

Powell reported on the random drug testing completed during the first semester at Holyoke JR/SR High School, noting that approximately six students were tested every other week.

Forty-three tests were completed last semester, with one being from a parent request.

Three positive tests resulted. Two were positive for TCH, but neither student was involved in activities or athletics at the time of the test. One student was re-tested for a second positive result, and the student is no longer in the district. The other student re-tested negative.

The third positive was from an amphetamines test. A doctor’s note provided explanation for it.

Currently there are 161 students enrolled in the district’s RDT program. This includes 67% of the district’s junior high students, 66% of high school students and nine students from other schools who participate on Holyoke sports teams.

“I still think this is a very effective tool for our students,” said Powell. She pointed out that they’ve said all along that they’re not in it to catch students doing bad things but to help give them a reason to say no to bad things.

Between last week’s short board meeting and an executive session at the end of the evening, the school board held a retreat.

In other business at the Feb. 10 meeting, the school board:

— Approved social studies teacher Micah Mehl as the high school drama director at a stipend of $1,551, noting she hopes to put a spring play together.

— Noted timelines for March board meetings: Thursday, March 4, incorporating a construction final drawings update with coordinators of the BEST project; and Tuesday, March 23, for the second meeting of the month.

— Held a 42-minute executive session with Stumpf after the retreat for an informal superintendent evaluation.