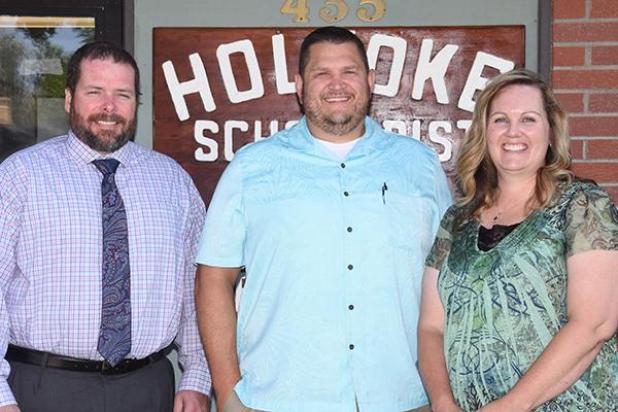 Building relationships with staff, students and the community is a targeted goal for the year as a brand-new administrative team leads Holyoke School District into 2018-19.
Kyle Stumpf, who has served as Holyoke Elementary School principal for the past nine years, stepped into the superintendent role July 1.
Shane Walkinshaw assumed the reins as principal at Holyoke JR/SR High July 1, coming from Arickaree School District, where he served as superintendent/principal.
On Aug. 1, Andrea Kammer will officially begin her duties as principal at Holyoke Elementary. While she served as principal at Wray Elementary for the past three and a half years, Kammer and her family have maintained their home in Holyoke, where she taught for eight and a half years prior to taking the principal job in Wray.
While their roles are very new, Stumpf expressed his appreciation for Walkinshaw and Kammer for the time they’ve spent going to trainings and participating in interviews for staff members prior to the official start of their contracts.
All three administrators attended the Student-Centered Accountability Program Summit in Colorado Springs June 12-13.
S-CAP provides an alternative means of accrediting schools based on values that are important to individual districts. It’s about the whole child approach, not just test data.
Holyoke was not one of the five core school districts involved in S-CAP three years ago, but the local district’s involvement led to being invited to have a voice in the S-CAP group, along with the original five schools.
Stumpf cites S-CAP, along with visible learning and technology, as ongoing focus areas in the district.
He would like to see some of these progress further before taking on new things. He expressed the importance of finding a balance with staff before finding new “next thing” projects.
A socio-emotional survey was completed at both schools in Holyoke the last couple of weeks of the past school year. Stumpf hopes to start 2018-19 with training for staff, using the socio-emotional survey data results to benefit students.
Kammer looks forward to getting to know the staff at the elementary school in a different setting from when she was a fellow teacher in the district.
She cited the importance of listening to staff, community and students to make sure they’re moving in a positive direction. “I’m just super excited to get the school year started,” she added.
As the only administrator at Arickaree, Walkinshaw acknowledged that he’s never been part of an administrative staff. He said he’s excited to be part of a team of administrators and to have the opportunity to work in the Holyoke School District.
This past year at Arickaree, he taught a class that interacted with students in a Science, Technology, Engineering and Math program in Highlands Ranch.
The synchronous learning for Arickaree students provided more opportunities, while on the other end of the distance learning, Highland Ranch STEM students focused on how to learn from rural Colorado. A school in Mexico was added to the mix for language learning, as well.
Walkinshaw noted that he was attracted to Holyoke because of the huge involvement in technology, as well as the district’s forward thinking in lots of areas.
“The start of the school year is very exciting,” said Stumpf, looking ahead a few weeks. He added that it’s a powerful time in kids’ lives. “The first week of school sets the stage for students to feel welcome, safe and that they have the capacity to change the world.”

Stumpf completes 15 years as principal
Stumpf’s new superintendent role follows 15 years as a principal — six in Merino and the last nine in Holyoke. Right out of college, in 1999, he was a second-grade teacher in Fleming for three years.
From 1998-2009, he also owned and operated a custom hay business. Additionally, he bred, calved, raised and sold registered Angus bulls and heifers throughout northeast Colorado.
After growing up in Merino, Stumpf earned a bachelor’s degree in elementary education from the University of Wyoming. He later obtained a master’s in education from Grand Canyon University, and a master’s in administration, as well as his administrator superintendent’s certificate, from Adams State College.
His wife, Christy, has been an English/math teacher in grades 6-8 in Fleming for over 20 years. The Stumpfs moved to the district house in Holyoke last week and have appreciated the genuine welcome they have received.
Daughters Timmi Keisel and Alli Keisel will be a junior and freshman, respectively, at Chadron State College in Nebraska this fall, where both will be playing volleyball. Timmi plans to do her student teaching in high school English, and Alli is pursuing a career in physical therapy.
Since he sold his Harley about 10 years ago, Stumpf has since purchased a Jeep with no top, and he and Christy enjoy their jaunts in the Jeep.

Kammer glad to be back to her home base
Having commuted to Wray to serve as principal for the past three and a half years, Kammer said she is blessed to be back in Holyoke working with the staff that she started with back in 2006. She values her experience in Wray but is glad to be back to her home base.
After earning her Bachelor of Arts degree in mathematics with emphasis in elementary education from the University of Northern Colorado in 2003, Kammer taught for three years at Baker Central School in Fort Morgan.
She taught sixth grade in Holyoke for the next eight and a half years, including two years (2008-10) when the sixth grade was part of the junior high.
Kammer added a Master of Arts degree in teaching from UNC in 2006 and obtained her principal licensure endorsement from Adams State College in 2010.
Growing up in her family business — Edwards Market and Flowerland in Fort Morgan — Kammer acknowledges that it gave her a lot of her work ethic, and she attributes that to her parents, Ron and Vicki Edwards. Kammer’s twin sister, Angie Aker, is now the fourth-generation owner of the family business.
Her husband, Marcus, is a farmhand for M&S Farms in Holyoke, and the Kammers have a crop-share circle and a cash-rent circle. Their children include Benjamin, who will be a third-grader, and Aubree, a first-grader.
Outside of school, Kammer said she likes being a mom, helping at the farm and cooking meals for harvest.

Walkinshaw begins 14th year in education
After 13 years on the staff of the Arickaree School District in Anton, Walkinshaw looks forward to the opportunities in Holyoke.
He graduated from Bethune High School and earned his Bachelor of Arts degree in kinesiology with emphasis on K-12 physical education from UNC in 2002.
In his first role at Arickaree, Walkinshaw served as a physical education teacher and athletic director. He assumed the principal role in 2013, then added superintendent duties in 2015.
He obtained his Master of Arts in educational leadership from Adams State University and has a State of Colorado K-12 principal license.
His wife, Sara, is in her 26th year as business official for Arickaree School District, and she will maintain that role.
Walkinshaw has two grown step-children, Ryan Stuhlmiller, a crop duster in Alliance, Nebraska, and Megan Kestell, a dental hygienist in Albuquerque, New Mexico; as well as two grandchildren, Kason and Jax Kestell, ages 2 and 6 months.
Walkinshaw says he has a Harley when asked about what he likes to do in his free time.