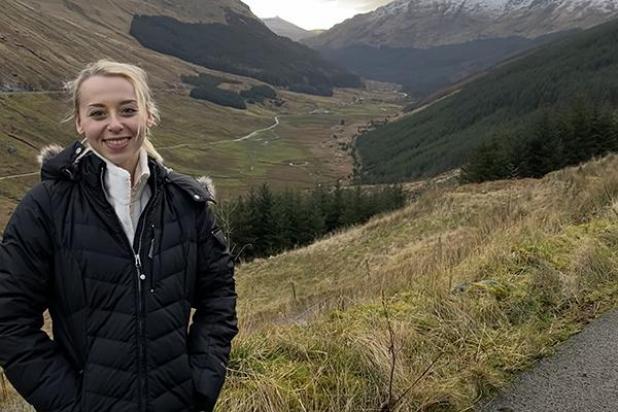 Logan Osborne, a 2017 graduate of HHS and a junior at CU Boulder, went from studying in Scotland one day to rushing home ahead of a coronavirus travel ban the next.

College in the time of coronavirus

Before the world outside of China had given much thought to the novel coronavirus — in fact, before it was even named — Holyoke’s Logan Osborne had cause to think about it. In Edinburgh, Scotland, for a semester, she had a roommate from Hong Kong who decided to study abroad, in part, to get away from the virus.

Osborne, who graduated from Holyoke High School in 2017, began her study abroad program in January. “Every month our program advisors seemed to get more and more concerned with the virus,” she said, looking back on her time in Scotland.

In February, students studying in Italy were sent home, but to Osborne and her peers, the problem still seemed isolated and far enough away from them to not be a concern. Before long, though, students in Spain were sent home. In the second week of March, Osborne and her friends began to discuss the possibility that they would be too. They figured they had a week or two before the decision would be made, but the very next day they were advised to return home.

“Everything happened very quickly and I had about two days to say goodbye to Scotland,” Osborne said.

Megan Parker was about halfway through her final semester at Colorado Christian University when she received word that she would have to move off campus and finish her classes online. That didn’t concern her as much as the fact that she had student teaching to continue as well.

“During this time I didn’t know if Jefferson County was moving to online learning, so I had to figure out if there was a way I could stay in Denver or if I needed to move back home,” she said.

By the end of the week, the district had decided to switch to remote learning, and Parker, a 2016 graduate of HHS, decided to move back to Holyoke for the remainder of the semester.

Lauren Harvey, a 2017 HHS graduate and a junior at Metropolitan State University of Denver, already lived off campus. Nevertheless, she faced her own set of challenges when her schooling went online.

“When the coronavirus started to become an issue,” she said, “it was about five weeks into the spring semester, so I had just gotten familiar with my courses and into the intense workload that comes with upper division courses.”

One of which is a field experience course that requires her to spend 60 hours in a secondary education classroom to observe and teach. In addition to attending school full time, Harvey works part time as a youth programs director for the City of Lakewood.

MSU offers an abundance of online classes anyway, so it already had systems in place for submitting assignments and such. Despite that, Harvey said the transition has not been seamless.

“None of my professors were prepared for this, and neither were we,” she said.

Ty Camblin is slated to graduate from Colorado State University this December, and he, for one, has had a rather positive experience with the coronavirus changes.

At the start of the semester, most of his learning took place in the classroom while assignments were turned in online. Now he simply watches lectures online, too. Since returning to Holyoke, Camblin has been able to work for Einspahr Farms while finishing out the semester remotely. With technology on his side, he can even watch lectures on his iPad while the GPS drives the tractor.

“Honestly, I don’t mind the classes being online because I would rather be in a tractor or working in the shop than sitting at a desk in a classroom,” Camblin said.

Alex Strauss, another 2017 HHS graduate studying at CSU, has three courses that are the traditional lecture and test format. He, too, watches his lectures online and has experienced a fairly easy transition to remote learning.

His fourth class, business writing, includes projects assigned throughout the semester. It worked out that he had only one group project remaining when the coronavirus hit Colorado. For that project, his group meets once a week using Microsoft Teams. The process is aided by a responsive professor.

“If we have any questions we just shoot her an email, and she gets back pretty quickly,” Strauss said.

Harvey has likewise found supportive professors invaluable in the current situation. They have been understanding of the unique challenges faced by MSU students. As a commuter campus with no on-campus housing, MSU is attended by many students that are working concurrently.

In Harvey’s case, lecture-based courses are meeting virtually via Microsoft Teams, allowing for video chat and discussion. The course with field experience no longer requires 60 hours in the classroom, but Harvey must watch virtual teaching videos and do observation reports on them.

Parker’s student teaching continues online with a third grade class at Rose Stein. Like Holyoke, Rose Stein has one-to-one devices, but not every student was able to check out a Chromebook, and some of the kids don’t have internet access at home.

Through weekly check-ins with her students, Parker has learned that most find it difficult to motivate themselves to do schoolwork at home.

“The school is highly impacted,” Parker said, “so the most challenging part about student teaching is not being able to be there for the students and reassure them during this time.”

Between checking on her students and getting her own coursework done, Parker is also left with the feeling that she’s “constantly glued to an electronic device.”

Despite the ease of his transition, Strauss has noticed that classes are tougher online. There is more responsibility on the student to stay on top of learning the material, he explained.

As far as the coursework itself goes, Osborne is faring well. She’s taking classes remotely and turning in final exams that were supposed to be due in May. Despite her program being cut short, CU Boulder, where she’s a junior,  will honor credit for courses taken abroad on a pass/fail basis.

The truly challenging part for Osborne was saying goodbye to the friends that she met abroad and leaving Scotland so early.

“We had trips to Spain, Greece, the Netherlands and Ireland all planned for the next few weeks, and it was super disappointing that we weren’t able to go,” she said.

Parker is similarly disappointed to be finishing her senior year away from her friends.

“Throughout the four years at CCU, I have been surrounded by the same classmates,” she explained. “We have learned to constantly collaborate, and we have pushed one another to do our best, so the lack of communication and community is challenging.”

Though she lives with her family rather than with on-campus friends, Harvey is experiencing her own changes to daily life. Her husband, Marques, is an essential employee and continues to go to work during the days. While at home, Harvey is joined by her 3 1/2-year-old, so finding time to focus 100% on school can be quite difficult, she said.

Moving forward, there are still many unknowns. When will in-person instruction resume? Will there be lasting changes as a result of this unusual semester? Parker, who will graduate May 22 online, is one of many who has a commencement ceremony being impacted. Only time will tell how applying for jobs may be affected by the coronavirus outbreak.

Despite the challenges and uncertainties, Osborne expressed a sentiment shared by many during this unprecedented time: “I am happy to be home with my family and grateful that we are all safe and in good health.”