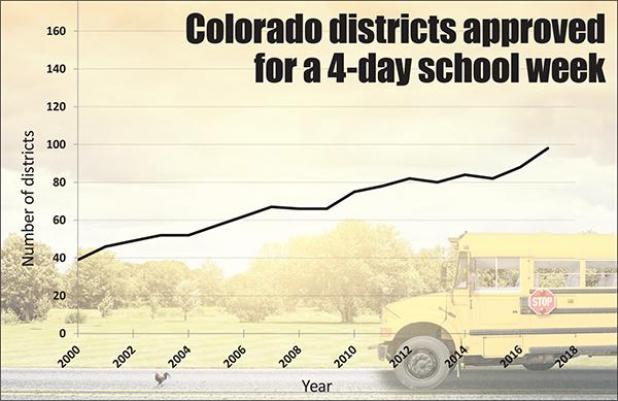 With a new school year underway and Valley School District in Logan County being the latest in the area to switch over to the four-day school week, it’s a decision that’s been on many people’s minds. Statewide, the number of school districts that use a four-day week has climbed in the years since the practice first began in 1980 with just three districts. Now, 37 years later, 98 districts use a shortened week.
Four-day school weeks in Colorado are something typically associated with rural (serving 6,500 students or fewer) or small rural (fewer than 1,000 students) districts. Since Holyoke falls into that category, it’s not a surprise to hear the topic come up around town.
So what does the trend mean for Holyoke? For the most part, it’s simply a matter of coordinating school activities and athletics with other districts that have switched to the shorter week. Athletic/activities director Sandra Rahe said that there is very little impact when it comes to scheduling.
To make up for the lost day, districts who use a shorter week also have longer days — think seven and a half hours instead of six. Regardless of the schedule, Colorado schools are required to have at least 1,080 hours of instruction. If anything, it’s the longer days that affect neighboring schools, Rahe explained. Some games start later, for example, but typically, there aren’t any more scheduling difficulties than usual.
Superintendent John McCleary, who has worked in districts with four- and five-day weeks, noted that it’s a unique decision that each district has to make for itself. What works for one district may not work for another. As for Holyoke, he said there does not seem to be much interest in a four-day week from the community.

Savings motivate many districts
Many districts turn to a four-day week as a means to save money. Valley School District, for example, cited a $1.25 million shortfall in the budget when making its decision. According to the Colorado Department of Education, savings typically come from transportation and food service, which have about 20 percent less use when compared to a five-day week.
Another advantage often mentioned is fewer absences since parents and guardians can schedule appointments for students on the off days. In the instance of Valley district, Monday was specifically chosen, in part, because more doctors’ offices are closed on Fridays. Of course, the flip side is that missing one day out of four means a larger percentage missed than an absence during the traditional five-day week.
According to McCleary, a four-day week is one incentive rural districts can offer to teachers. In recruiting, some rural districts have a hard time attracting and retaining quality teachers because they can’t pay as much as larger schools, but a longer weekend can be a powerful draw.
Until school funding gets better, McCleary expects the upward trend to continue in Colorado. “I’m really glad that the people of Holyoke have kept schools operating and functioning on a longer calendar,” he added.

4-day weeks aren’t without drawbacks
Districts don’t make the transition to four-day weeks hastily; there are many pros and cons to consider. In the case of Valley School District, there are already some examples of how the community and school are addressing potential negatives.
Immediately families without a stay-at-home parent wonder about the implications of another day at home. In some cases, neighborhoods, families or colleagues make child care arrangements with one another. Not everyone has such a support system or means to do so.
In response, some organizations have created new programs. Family Resource Center in Sterling is one of them. It’s ASSET Club — emphasizing art, socialization, science, education, teamwork — is a free program on Mondays, 8 a.m.-3:45 p.m., for students ages 6-17. The program has received immense community support and donations to offer meals, snacks and classes to those registered. However, already at capacity with 65 students registered, there is a waiting list to join.
While ASSET Club is the solution for some families, others have turned to paying for other local child care. Trinity Lutheran Early Education Center opened a new school-age program and can accommodate up to 22 students ages 6-10, with plans to expand in the future. The Valley School District’s After School Club in Sterling has also created a Monday program for students. Any community that changes to a four-day school week will have to address these child care concerns.
Another issue with an extended weekend is the meals students go without. In every school district there are children who depend on school breakfast and lunch because they don’t have enough to eat at home. Another community within Valley School District is Iliff, where Caliche schools are located.
One concerned community member has taken to crowd funding to address a problem he sees in Iliff. According to the Monday Meals by Alicia GoFundMe page, there are anywhere from 50-100 kids in the rural area that will go without lunch on the 36 Mondays throughout the 2017-18 school year. They’ve set a goal to raise $9,500, which would provide meals for 75 kids for each of those 36 Mondays.
While the Valley district made the decision to shorten the school week to address a shortfall in the budget, it’s encouraging to see communities meeting some of the shortfalls left, in turn, by the decision.
According to the Colorado Department of Education, 98 of the 178 school districts, plus one BOCES-operated school and some schools in the Charter School Institute utilize a four-day week. Although that equates to 55 percent of Colorado school districts, they tend to be the smaller schools, so the majority of students in the state are still on a traditional five-day week.