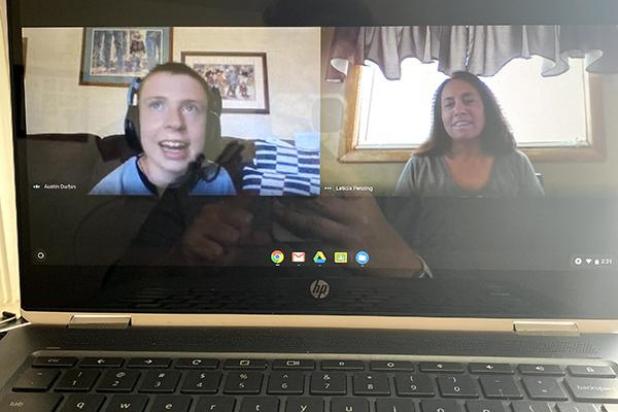 Parents, students and staff embraced a whole lot of learning beyond classroom topics in the e-learning world of English as a second language and special education as reported by teachers and paraprofessionals at the May 19 Holyoke School Board Zoom meeting.

Beyond actually connecting with their students during the virtual learning setting the past couple of months, ESL and special education staff valued strongly the relationships built with parents in this endeavor.

Nancy Miles, resource teacher at Holyoke JR/SR High, emphasized the importance of working with families of her special needs students because their help and support during the virtual learning time was vital.

She reported that parents enjoyed watching their child in the virtual classroom setting because they saw them do things they didn’t realize they were able to do.

Likewise, Miles said she benefitted from seeing students in their home environments as it gave her ideas for future classroom activity.

Initially, parents had to be taught to use the technology. “We’ve all learned a lot,” Miles acknowledged, noting that sharing experiences through distance learning helped enhance relationships among parents, students, teachers and paraprofessionals.

Holyoke JR/SR High Principal Shane Walkinshaw said he was initially worried what online learning would look like for special needs students, and he praised Miles and staff for the great job.

Superintendent Kyle Stumpf joined one of Miles’ virtual classes in early April and said he was impressed with what students were doing on their own. “The sheer joy they displayed in getting to see each other and interact with each other was really powerful,” Stumpf added.

Miles said they loved having Stumpf join their class and were still talking about it weeks later.

The K-6 ESL online learning report was given by teachers Yesenia Bencomo and Cecilia Marquez, as well as paraprofessionals Christy Shafer and Aydaly Juarez.

Aside from teaching students in their daily groups, translating and interpreting took a great deal of time from all four of the ESL staff, especially in the beginning.

Elementary Principal Andrea Kammer said the foursome put in a ton of time talking with parents, helping them understand the technology and the directions. In the first couple of weeks, she said they were constantly on the phone, many days from 8 a.m.-8 p.m., talking with parents.

They reached out to other staff members, offering to translate and interpret lesson plans for better communication with their students’ parents, as well.

Bencomo said it was very time consuming as they worked with some parents who had never turned on a computer to others who just had to adapt to the structure of the online learning.

However, she sees it as time well spent as parents embraced the situation and jumped on board. “In the end, it made all of our jobs a lot easier,” she added.

Sometimes three-way phone calls were required as they involved regular classroom teachers. “But it’s so exciting to see where they started and where they finished with this process,” Bencomo said.

“Building relationships with parents — getting them to trust us — really helped us be successful,” she added.

She pointed out that it’s very hard for someone who doesn’t understand the language to ask questions. She praised the Spanish-speaking parents for taking that step, saying they need help and being a huge part of their children’s education.

During the ESL e-learning presentation, a one-minute video was shown, as put together by Marquez and her daughter, Lali. It featured four parents sharing brief comments (in Spanish) as they related positively on the e-learning experience. Their comments were printed in English for the school board viewing.

Bencomo pointed out that one of the parents was in her vehicle as she responded. “The level of commitment that she offered not only to her child but to us as the school district really touched us.” Even though the parent was on her way somewhere, it was important to her to share her input and support for the e-learning effort.

In addition to the translation and interpretation support, Marquez added that the ESL parents were extremely appreciative of the lunches provided daily for students, the internet availability and the Chromebooks for the students.

“I think this is opening so many new doors for our school district,” Bencomo said.

“Just from this hardship we’ve had to go through (by not being able to have in-person classes), we know that our Hispanic/ESL parents are willing to step up and do what needs to be done. Truly, all we have to do now is ask them,” she added, as a sincere tribute of admiration.