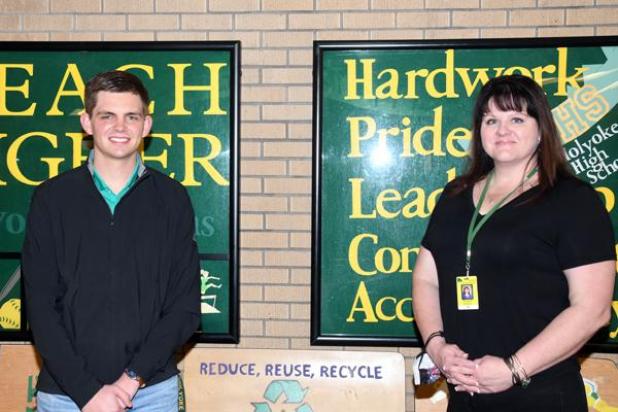 Colbey Stumpf, at left, is a new social studies teacher at Holyoke JR/SR High School, and Elizabeth Hutches is the long-term substitute teacher taking over Clark Ginapp’s English classes after he passed away. Both are very excited for their roles and look forward to establishing relationships with students and getting them excited about their respective subjects. — The Holyoke Enterprise | Johnson Publications

Stumpf is a social studies teacher, and Hutches is the long-term substitute English teacher, taking over Clark Ginapp’s classes after his passing.

Stumpf is teaching eighth and 10th grade American history and 11th grade government/economics and will be the assistant high school boys basketball coach. He is also part of the seminar team for the eighth grade class, helping them prepare for college and life after high school.

Stumpf grew up in Iliff and graduated from Caliche High School in 2017. He attended Northeastern Junior College for one year and graduated from the University of Northern Colorado in December 2020 with a degree in history with an emphasis in education.

While in Greeley, he gained practical teaching experience through teacher observation and practicum at Prairie Heights Middle School, Northridge High School and Union Colony Preparatory School. He completed his student teaching at Peetz High School in the fall of 2020.

“I really enjoy northeast Colorado, so I knew I wanted to come back here to teach,” Stumpf said. When he heard there was an opening in Holyoke, he thought it would be an opportunity to gain some great teaching experience.

Stumpf said he is looking forward to getting to know the students and building relationships with them. He currently lives in Iliff, but plans to eventually move closer to Holyoke and become involved with the community.

He said he wants to bring a new energy and a new and revived way of teaching and connecting with students.

“The students are very energetic and eager to learn,” Stumpf said. “The staff has been extremely helpful and always willing to lend a helping hand, which is really nice since I’m a first-year teacher.”

Hutches is teaching creative writing, American literature, speech and drama, and three ninth grade English I classes. She is also part of the seminar team for the junior class.

Hutches moved to Holyoke with her family in February 2016. “I was not raised in a small town,” she said, “but I like living in a small town, especially raising children.”

Her daughter Traeli graduated from HHS in 2020. She is currently a freshman at Colorado State University in Fort Collins, working toward a Bachelor of Science degree with the ultimate goal of becoming a dentist. Her son Jaxson is a sophomore at HHS.

Hutches graduated from Carson High School in Carson City, Nevada, in 1995. She grew up in Carson City and said there is a night-and-day difference between it and Holyoke. She said Nevada can be a very transient type of community with people coming and going frequently, and she really enjoys the amazing small-town support and the continuity of the community in Holyoke.

She graduated from CSU in 2001 with a Bachelor of Arts in English with a minor in journalism.

After moving to Holyoke, she was the executive director of Holyoke Chamber of Commerce for almost two years before taking a marketing/public relations position with Melissa Memorial Hospital from January 2018 until August 2020. She also worked as project coordinator for Holyoke Community Childcare Initiative in 2019. Hutches is the Holyoke Chamber of Commerce board president, a role she has held for over two years.

Hutches started substitute teaching in August 2020, gaining experience in the elementary and junior/senior high schools. She said she wanted to be a helpful part of the community and found that she really enjoys being in the classroom.

“It has been a fun and eye-opening experience,” she said, adding that she is very excited to be a part of the English team. “The school district has been so welcoming.”

“For me, this is a whole new adventure,” she continued. “I’m really looking forward to getting to know all the students.”

She said she wants to get students excited about English and help them see how it applies to everyday life in different ways.

Hutches plans to go through the process of getting an emergency teaching authorization, and her goal is to apply to be a teacher next year and eventually get her master’s degree.