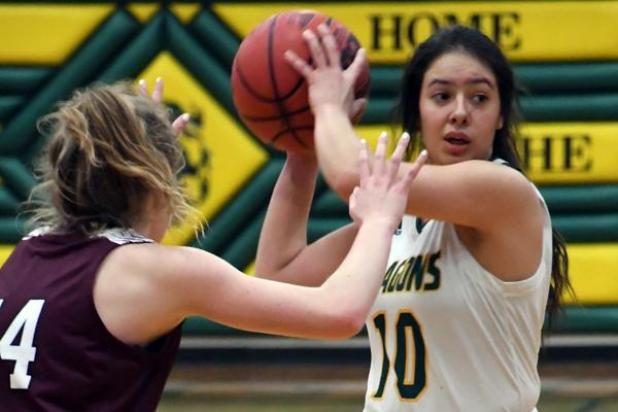 After a home win against Merino Friday, Feb. 7, and another victory in Wiggins Saturday, Feb. 8, the Holyoke Lady Dragon varsity basketball team has six conference wins under its belt.

The final two are this week, with a game in Akron Thursday and a home game against Caliche Friday.

Holyoke’s overall record is 15-1, and as of Monday, the chsaanow.com’s RPI ranking listed the team as No. 1 in 2A, followed by Heritage Christian and Limon.

An “offensive explosion” is the way coach John Baumgartner described the first half of Friday’s home game with Merino. The Dragons put up 20 points in the first quarter, followed by 15 in the second.

Merino also stepped on the court with their eye on the basket. The Rams sunk five 3-pointers in the first half, contributing a large chunk to their 23 points.

Baumgartner said the Lady Dragons stepped up their defense in the second half, keeping Merino to 16 points while putting up 18 of their own points for a 53-39 win at the final buzzer.