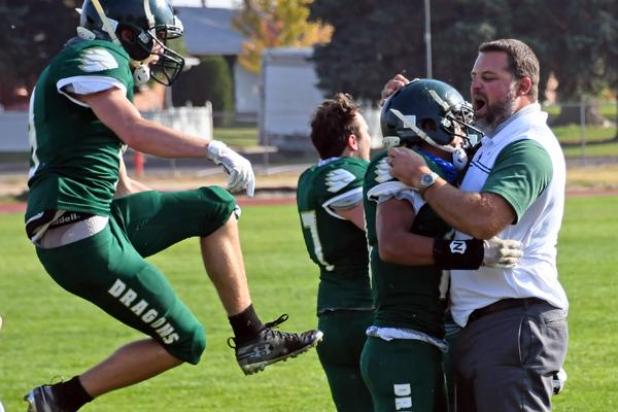 Holyoke Dragon football fans were treated to an exciting overtime win at home Saturday, Oct. 10, against Highland when the Dragons won their first game of the season 22-20.

Highland took an early 14-0 lead just over six minutes into the game. Holyoke got on the board at the end of the first quarter and tied the game at 14 late in the second.

The Dragons went on offense first in overtime, taking possession of the ball at Highland’s 10-yard line. Two incomplete passes and a throw-away out of bounds after a quarterback  scramble gave the Dragons fourth-and-goal from the 10-yard line.

Miles Sprague passed to Wyatt Sprague, who came down with the ball in the end zone for the Dragon touchdown. Wyatt handed the ball off to his brother, Miles, for the successful 2-point conversion, giving the Dragons a 22-14 lead in overtime.

Highland then got the ball on the 10-yard line. The Huskies scored a touchdown on a handoff to the left side on their first play, making the score 22-20 and requiring a successful 2-point conversion to keep pace with Holyoke.

On the conversion try, Highland attempted another run to the left, but the ball carrier was tackled just short of the goal line, securing the victory for the Dragons, 22-20.