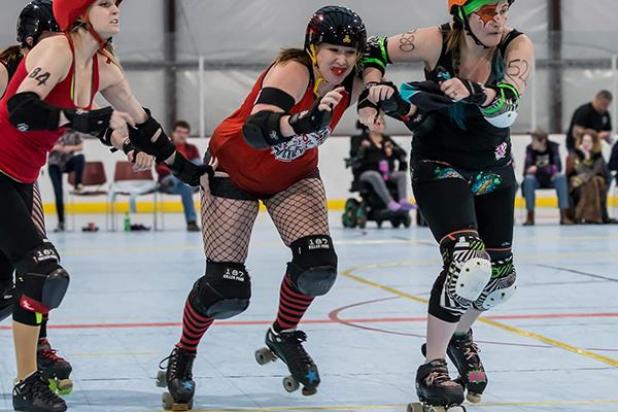 Shayla Hecht, pictured at center, gets her game face on and competes as a blocker for the Flat Rock Roller Derby team based in North Platte, Nebraska. 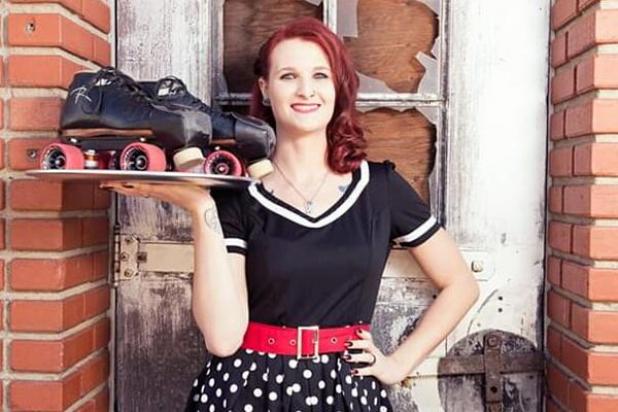 While at a photo shoot for the Flat Rock Roller Derby Team, Molly Weils, at right, shows off the traditional roller skates used in the fast-paced contact sport.

Fishnet stockings are optional. A fierce spirit is not.
This is the world of roller derby. And two sisters have jumped in with both feet.
Shayla (Fricke) Hecht, 29, and Molly (Fricke) Weils, 27, both residents of North Platte, Nebraska, have joined the hometown Flat Rock Roller Derby team, for better or for worse.
“You never know what you’re going to get,” said Hecht of the fast-paced contact sport. At least one person on the team breaks a bone during the course of a year, she said.
Both Hecht and Weils have escaped major injuries since they joined in 2016 and 2017, respectively, and were quick to point out that flat track roller derby is different today than when it became popular in the mid-1900s.
“It’s a very strategic game,” said Hecht, whose main position is as a “blocker.” Yes, there are hits, and yes, people fall on the floor, but it’s also about teamwork and playing within a strict set of rules.
“We never want to hurt another team’s player,” said Weils — a “jammer” who tries to score points by lapping a member of the opposing team.
In fact, after a bout, the two teams generally go to a bar or restaurant to hang out. And with bouts anywhere from Wyoming and Colorado to South Dakota and Kansas, the sisters have met a lot of people who share their passion for roller derby.
The recreational, self-taught North Platte team originally started in 2012 as the Heartland Hellcats, but recently changed its name to Flat Rock — a nickname for North Platte. “It’s hard to get yourself out into the community when you are a Hellcat,” said Hecht.
As a nonprofit organization, the team actually does a lot of community work. Proceeds from their home bouts are also donated to other nonprofits, like the Special Olympics.
The team, which happens to be all women, currently has 22 on the roster — the biggest its ever seen.
Hecht, who works as an LPN at Gosnell Family Medicine, and Weils, a stay-at-home mom and babysitter, said their teammates come from all walks of life.
Both sisters were very involved in athletics as students at Holyoke High School but have since found it hard to get plugged in to a sport. “If you don’t do traditional sports like volleyball or softball, there’s not a lot of options,” said Hecht. Thankfully, she found roller derby. “It doesn’t matter what shape or size you are, there is a place for you in roller derby.”