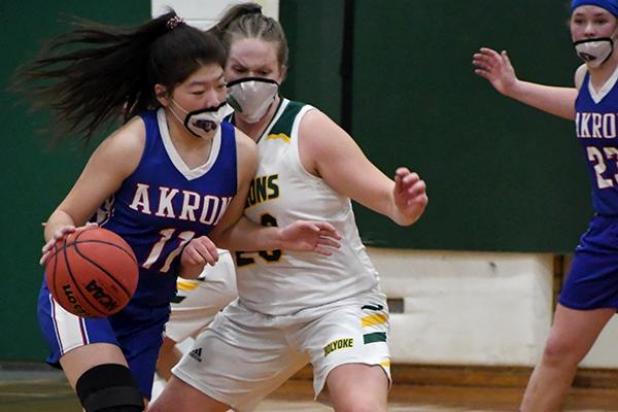 After the first eight games of the season, the Lady Dragon basketball team remains undefeated.

Holyoke secured two more wins on its home court against Akron on Friday, Feb. 12, and Wiggins on Monday, Feb. 15.

The Wiggins game was originally scheduled for Saturday but was postponed due to bitter cold temps and forecasted snow.

The intensity will pick up in the second half of the season, with games against Sedgwick County, Haxtun, Wray, Burlington and Limon all coming up.

Coach John Baumgartner said the team is working hard with playoffs in mind. “That’s what we’re shooting for.”

“We didn’t come out of the gates well” in Friday’s game against Akron, said Baumgartner. The Lady Dragons trailed 8-4 at the end of the first period.

The momentum shifted in Holyoke’s favor, and the Lady Dragons really picked it up in the second and third quarters, outscoring Akron 18-7 and 20-10 respectively. “That’s when we started playing some basketball,” said Baumgartner.

He said at one point Holyoke was up by 20 points, but they simply couldn’t hold on to that margin. Holyoke was still able to win by double digits, however, beating Akron 52-39.

Baumgartner said it wasn’t their best defensive effort, they put Akron on the line more than he would have liked and at 58% accuracy, Holyoke’s free throws could have been better.

A bright spot for the Lady Dragons was connecting with the basket from behind the arc, with five 3-pointers helping push them toward the win.

Four of those are credited to Lauren Herman. She also made four 2-pointers for a total of 20 points, making her the scoring leader of the night.

Vielsemeyer led rebounds with 15, followed by Herman with 13. They both blocked one shot as well.

Correy Koellner had the most steals with five, and Herman topped assists with four.