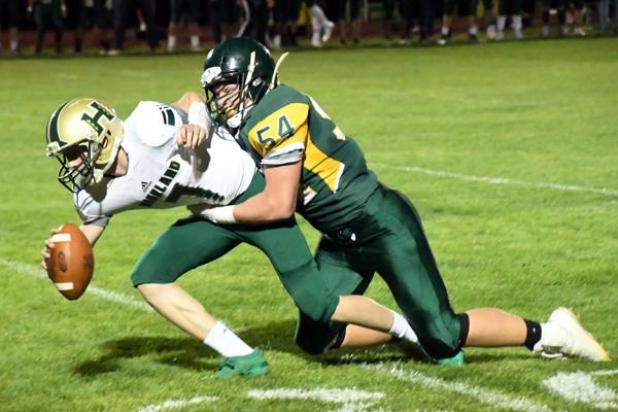 Huskies are no match in homecoming football game
Jes-c French, The Holyoke Enterprise

Following their fourth win of the season, the Holyoke Dragons are ranked third in Colorado 1A high school football, according to the CHSAANow.com poll. In the North Central league, the Dragons are first. This week will mark the beginning of league competition, with Holyoke vs. Yuma, Wiggins vs. Limon, and Burlington vs. Wray.

The Sept. 27 matchup between Holyoke and Highland ended up being a closer game than it originally appeared to be. In the end, though, the Dragons celebrated a 24-21 victory in front of the homecoming crowd.

Seth Watson got the game going on a high note with an 84-yard kickoff return touchdown. Alexis Vega made the extra point, putting Holyoke ahead 7-0 with 11:47 still on the clock.

Having kept the Huskies from making much progress of their own, the Dragons returned a punt to their 46-yard line and made their way downfield. Blake Mosenteen ran a touchdown in from the 4-yard line with 5:41 left in the quarter. Another successful PAT kick by Vega put the score at 14-0.

About three minutes into the second quarter of Friday’s game, Highland got on the board with a 9-yard touchdown pass. The extra point was no good, and the score was 14-6. With less than a minute left in the half, Mosenteen intercepted the ball and made it to midfield. Having made it to the 39-yard line with time running out, the Dragons went for a field goal. It was unsuccessful, and the score stood at 14-6 at halftime.