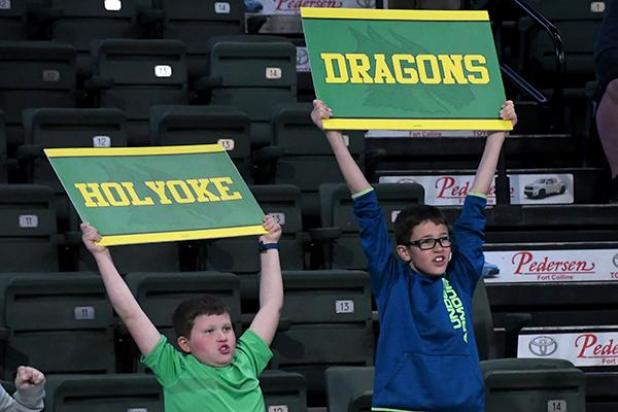 Cousins Levi Clayton, at left, and Riley Powell are part of a small crowd that cheered loud and proud for the Lady Dragons. — The Holyoke Enterprise | Johnson Publications

A lot of what-ifs

Word quickly spread of a social media post from the Colorado High School Activities Association. It announced that the governor had asked large public gatherings to establish protocols where they can have safe spacing at events to limit the spread of COVID-19. “Therefore, we are making the difficult decision to limit attendance to essential team personnel only, without fans in attendance,” said CHSAA. Parents, friends and loyal fans were stunned.

Fortunately, CHSAA later edited the post. “In response to several inquiries from family members of participants, each player will be allowed to have a maximum of four guests attend games.”

On a chilly morning, Thursday, March 12, a small group of people gathered in front of Holyoke JR/SR High School to send off the Lady Dragon basketball team. Many of the people there weren’t allowed to go watch the games in person. Lots of hugs, an impromptu singing of the school song and high hopes of a state championship sent the girls on their way to the 2A tournament at the Budweiser Events Center in Loveland.

A small but loud section of green and gold cheered the girls on to a win over Ignacio Thursday night. Little did they know that was the last time the team would be on the court together.

Afterwards, they enjoyed pizza together, and coaches were working on their game plan for Friday’s semifinal game against Sanford.

At 11 p.m. Thursday, this headline began popping up on social media: “All remaining state basketball tournaments have been cancelled.” A friend told senior player Emily Jelden about the heartbreaking news, and she relayed the information to coach John Baumgartner. He didn’t get an official email from CHSAA until later that night.