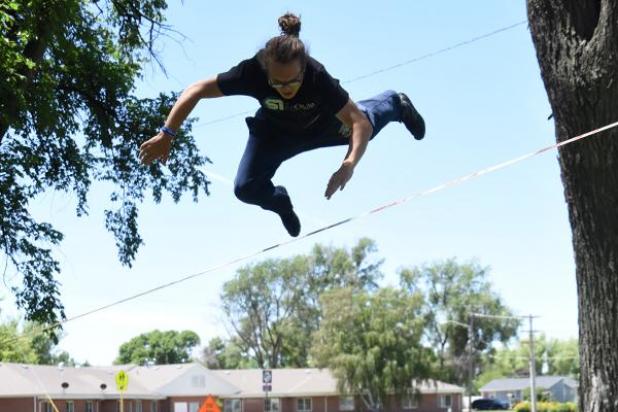 See that small line running across the photo? Anchored between two trees about 6 feet off the ground, that slackline is Dylon Lousberg’s ticket to international trickline recognition. —Johnson Publications photo 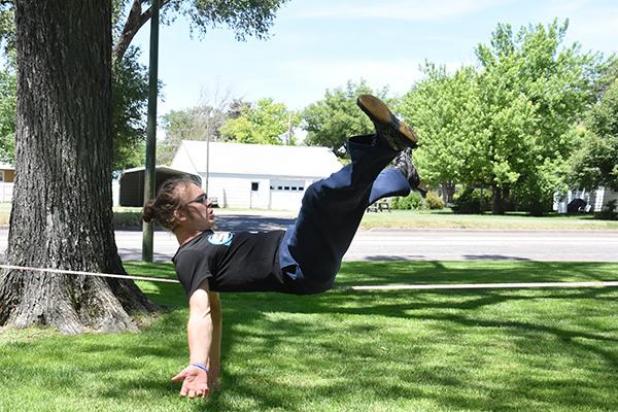 The average trickline measures just 2 inches across, but Dylon Lousberg has no problem maintaining balance as he bounces from his back to his feet to his chest. —Johnson Publications photo

It’s not often that Holyoke is the backdrop for a professional athlete training for international competition, but this summer, it’s just that. After most recently competing in the GoPro Mountain Games held in Vail June 8-11, Dylon Lousberg, who signed with Slackline Industries, is back home training for the next big competition: the 2017 Slackline World Cup Japan, Sept. 16-18.
In the midst of training at the city park, the recent Holyoke High School graduate took a break to talk about his budding career. He doesn’t mind when people stop by to watch or ask about what he’s doing. That’s probably a good thing since families gathered at the park and kids riding bikes to the swimming pool seem instantly entranced once they catch sight of him, and more than a few cars slow down to catch a better look.
The sport is still young, he said, and most people don’t know what he’s doing. However, he doesn’t hesitate to explain and demonstrate the sport he is so passionate about. “I hope it gets big, like skateboarding,” he said, rattling off major skateboarding competitions, and as the world of slacklining continues to grow, Lousberg has every intention of being a part of it.
It was his fifth-place finish at the Tudor International Slackline Invitational at the GMG that qualified him for the upcoming Japan competition. It was the biggest event he’s competed in to date. He felt the pressure of an especially large number of people watching, but he also thought it was cool that the slackliners kept crowds riveted for hours.
Tricklining consists of 30-40, maybe 50, different tricks linked together, he explained, and some people get bored watching it, but to him — and apparently the crowd at GMG — it never gets old.
Although he’s looking to the future with excitement, he has some accomplishments from his past that deserve recognition.
In May of this year, right before he graduated, he was a special guest at the ASP PRO Slack Slam at TheFitExpo in Chicago, Illinois. There, he placed second. With graduation under his belt, Lousberg went on to take fourth place in the slacklining competition at Dominion Riverrock in Richmond, Virginia.
Through recent events, Lousberg has found himself up against slackliners from around the world, including Japan, Russia, Chile, Peru and Switzerland.

For a video of Lousberg in action, click here.