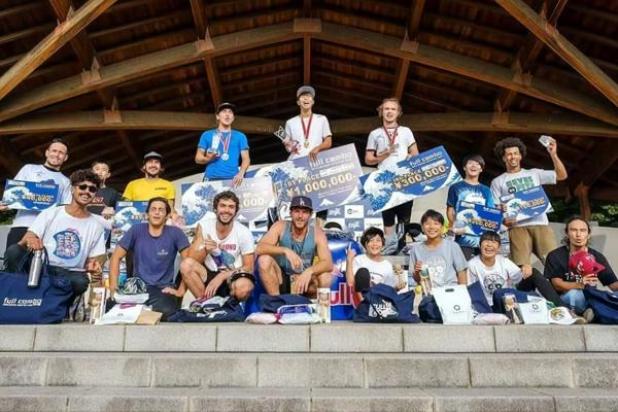 Dylon Lousberg, pictured at top right, is among the competitors in the 2019 Slackline World Cup FullCombo. He finished third overall.

Recognized as one of the top three slackliners in North America this April, Dylon Lousberg earned the chance to compete in the 2019 Slackline World Cup FullCombo. On Sept. 15, when the final trick had been completed in Obuse, Japan, Lousberg took third place.

Seventeen individuals from around the world were vying for the title in last month’s competition. In the point-based judging system, each trick a slackliner can do has a specific value. “The system heavily values how many tricks you can sync together and do in a row called a combo, hence the name FullCombo,” Lousberg explained.

The world cup utilizes head-to-head matches, and each athlete has 90 seconds to show their stuff. In Lousberg’s qualifying event back in April, the same point system was used, but he could do only 30 tricks for qualification.

This was the second time Lousberg qualified for the world cup, which is held every two years in Japan. In the 2017 event, he finished 11th. Slackliners must be in the top eight to compete in the final round at the world cup. “This year I prepared much harder and for a longer time before the competition,” he said, “and the work paid off.”

Slacklining is still a relatively new sport, and Lousberg has been impressed by the Japanese athletes and organizers who are working incredibly hard to push, promote and spread the sport. “The work they put into this competition is unlike any other,” he said.

The 2019 world cup boasted the biggest purse prize in slacklining history, totaling over $20,000.

Competing is a big part of Lousberg’s slacklining career, but he also does a lot of performing. At the moment he’s doing a Halloween show. In the midst of that, however, he has a show in Macau, China, at an MGM hotel. This winter, he’ll be traveling all over South America, training and participating in four competitions.

Lousberg is a 2017 graduate of Holyoke High School, and in the two short years since then, he’s already made quite the name for himself in the world of slacklining. Visit Lousberg's website at www.bounceandflip.com.