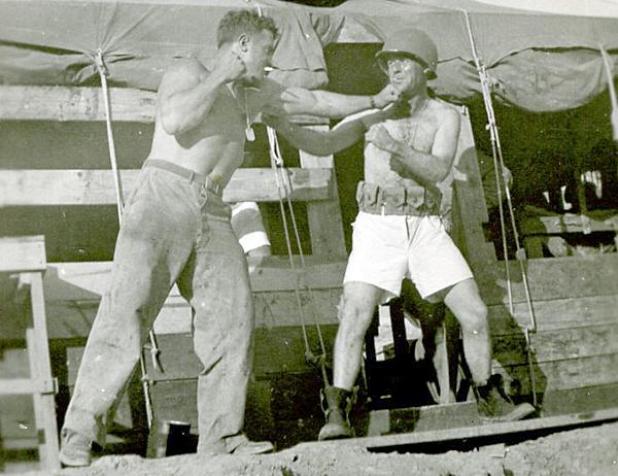 Holyoke’s Cap Holtzman, pictured at left, does some sparring during World War II. It was common at the time for boxers to keep up with the hobby during their time in the service. 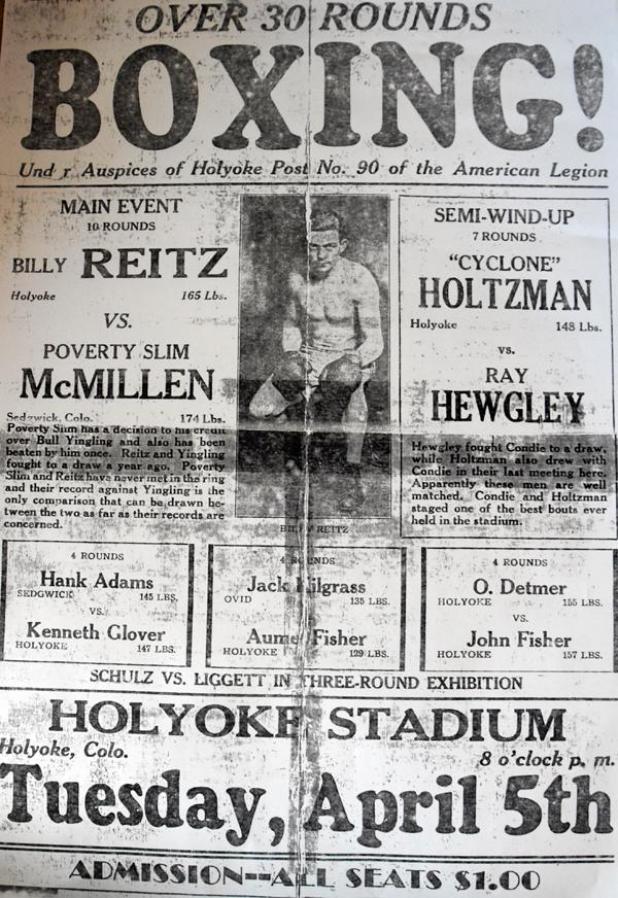 Among old posters collected by the descendants of local 1930s boxers, this April 5, 1932, event is the earliest Holyoke Stadium fight represented.

Pay-per-view’s got nothing on Depression-era pugilism

They went by names like Poverty Slim, Slasher, Lefty, Hard Boil and Judge. Their evenings routinely ended with them “bleeding freely from the nose.” Sold-out crowds gathered to watch the action, and it was right here in Holyoke.
In a time when the nation would listen to big-time bouts on the radio, people of Holyoke and the surrounding area had the chance to take in live boxing. And from the sound of it, action at Holyoke Stadium was every bit as entertaining as the pros — then and now.

Sales pavilion doubles as boxing ring
In a move so practical it could have only been pulled off in a farming community like Holyoke, local boxing was held in the livestock sales pavilion. It was erected by L.C. “Jim” Hoover starting Oct. 15, 1931. It was located just north of town on the east side of Highway 385. It measured 50 feet across with a 24-foot sales ring in the middle and could seat 750-800 people.
On its Nov. 17, 1931, grand opening, a big free lunch was served, followed by a hog and cattle sale so well-attended that hundreds of people were said to be turned away at the door. That very same night at 8 p.m., Holyoke’s first boxing event was sponsored by Post No. 90 of the American Legion. Spectators paid $1.25 for ringside seats and 75 cents for general admission, and over 400 people were in attendance. In the context of boxing at least, the venue was called the Holyoke Stadium.
In a time characterized by businesses closing, salaries being slashed and prices being constantly reduced, the cost of a night of entertainment was readily paid by scores of people happy to forget about hard times for 30 rounds or so.

Family ties keep memories of boxers alive
On that first card in November 1931, there were at least two boxers who have relatives still living in Holyoke in 2018. The main event featured Billy Reitz of Holyoke and Jake Baker of Fort Morgan, two men we know little about today. In the six-round semi-windup, however, Charles Holtzman of Holyoke beat “Billy the Kid” of Fleming. Charles was also known as “Cyclone,” Chas., Charlie and Pete. His niece and nephew, Connie and Tom Holtzman, live in Holyoke now.
Winning one of the four-round bouts that evening was Wayne “Blackie” Waln of Holyoke against Bielman of Sterling. Blackie’s nephew, Dan Waln, is also a current Holyoke resident.
It’s hard to say just what previous boxing experience Cyclone and Blackie had before Holyoke’s first event. The 27-year-old Cyclone, at least, seemed to have some experience fighting in nearby towns beforehand. Blackie was only 17 at the time, so it’s possible that he was still new to the ring.
At the time, boxing was a family affair. Take Biffo and Socko, two sons of Billy Reitz, who did an exhibition bout at the opening event. According to the Enterprise, they were “greeted with a shower of coins as the bout ended and were busy for several minutes picking up the money tossed into the ring by the spectators.” Billy, Sock and Biffo made frequent appearances at the Holyoke Stadium in the following years.
Charles had a younger brother, Albert “Cap” Holtzman, who began boxing in Holyoke on Sept. 21, 1933, at the age of 18. Cap was Connie and Tom’s father. Charles and Cap’s sister, Jessie, was married to John Fisher. He and his brother, Aumell Fisher, also boxed. John’s daughter-in-law, Carolyn Fisher, is another current resident of Holyoke. Though John did box, she said that he wasn’t as involved in it as the other family members.
A handful of posters advertising various boxing events are cherished by both the Holtzman and Fisher families. At this point they’re copies — and copies of copies — the originals long since gone. The earliest of the posters they have advertised an April 5, 1932, event — just the sixth one held in Holyoke. It was John’s first at the Holyoke Stadium, and he was 23 years old at the time. Though the poster advertised that he would be fighting O. Detmer of Holyoke, John actually fought Marlin Wood of Holyoke that night.
Aumell was also featured on the April 5 poster, though his first appearance at the Holyoke Stadium had come Feb. 23, 1932, when he was 21. In that bout, Aumell knocked out an opponent who had traveled all the way from South Dakota in the first round. As noted in an Enterprise article the following year, Aumell was on practically every fight card at the stadium.
Blackie also had a younger brother who emerged in the Holyoke boxing scene. Buford “Red” Waln, Dan’s father, was just 13 years old when he first fought at Holyoke Stadium. Weighing in at just 85 pounds, Red beat the 95-pound “Knockout” Fells on May 24, 1932. Some of the earlier events featured a youth battle royale, and Red may have been involved in those, but May 24 was the first Holyoke bout to promote him by name.

Drama reigns in the ring
Just as modern-day boxing has a reputation of being a tad on the histrionic side, the fights at Holyoke Stadium were rife with dramatic entertainment. And it kept people coming back.
Take that first Nov. 17, 1931, fight. One of the scheduled four-round bouts had a no-show, so Bruce Yingling of Yuma and Chink Condy of Big Springs, Nebraska, subbed in. The two weren’t an even match, though, so the crowd wasn’t having it. Spectators were so displeased, the official called it off after the first round.
Both fighters returned to the stadium Dec. 15, 1931, and got to face boxers of their own caliber. It was said of Yingling and Reitz that “these two men are rated as among the best middleweights in this section, but have never met in the ring. Both hold victories of many fighters of their weight and both have large followings who are expected here for the bout.”
Sure enough, hundreds of spectators again paid for the privilege of watching the fight. Even those who didn’t attend could have read up about it after the fact and learned that “a hard right to the jaw sent Yingling down for keeps in the fourth after he had weathered a storm of blows in the first three rounds.”