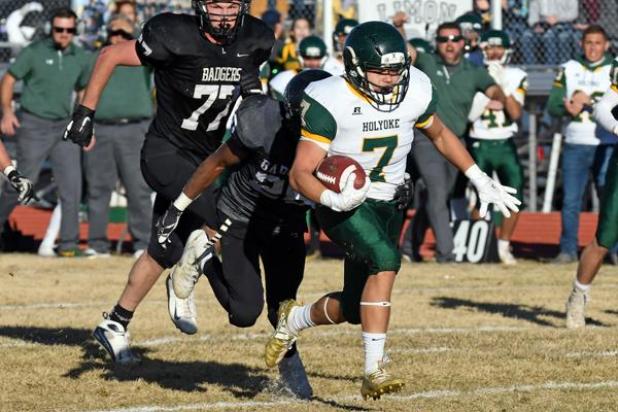 Just as Dragon football fans have come to expect, Michael Ramos bursts through the line for a big gain as HHS tries to mount a comeback. Throughout the season, Ramos broke multiple tackles on seemingly every carry. — The Holyoke Enterprise | Johnson Publications 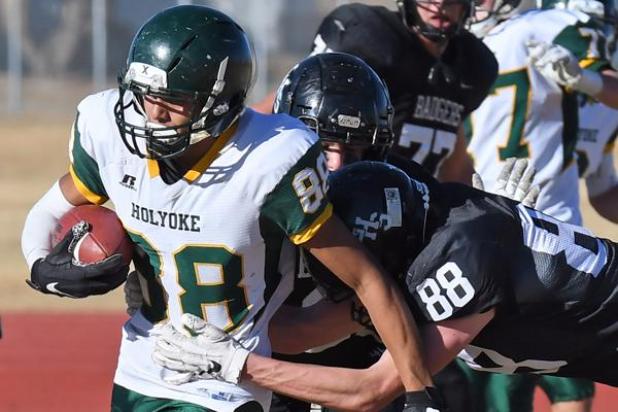 After one of his receptions in Saturday’s game, Luis Chafino breaks a tackle. – The Holyoke Enterprise | Johnson Publications

Seeing a high school football game in Limon is an experience. The marching band, the cheerleaders, the football history, the school spirit — it’s something worth seeing. But the home-field advantage seemed to give the Badgers just the edge they needed Nov. 23 in the Colorado 1A semifinal game with Holyoke.

Going into Saturday’s contest, the Dragons and Badgers were about as evenly matched as two teams can be. Holyoke was ranked No. 2 with an 11-0 record. Limon was ranked No. 3 with a 9-2 record. When they faced each other during regular-season play, the Dragons edged out the Badgers 14-12.

In the semifinal game it was the Badgers who eked out a 15-7 victory, earning a ticket to the state championship game Nov. 30.

The Badgers started off the game by kicking off to the 5-yard line, and Holyoke’s Stephen Murray returned it to the 16. After making a few modest gains, Holyoke was forced to punt. Limon returned the ball to their own 36. With passes broken up by Luis Chafino and Slaten Burris, Limon went on to punt as well.

Seth Watson returned the punt to the Holyoke 18. The Dragons managed a few first downs before punting again. The ball was downed at the Limon 35. Their own penalties kept the Badgers at bay as much as the Holyoke defense did, and the Limon team punted again before ever making it to Dragon territory.

Watson made a fair catch at the Holyoke 22, but the Dragons lost ground in the ensuing plays and ended up punting from the 11. With the score still at 0-0, Limon ended the quarter in possession of the ball and returned for the second quarter ready to capitalize on the opportunity.

With 8:07 on the clock, the Badgers ran a touchdown in from 1 yard out and readied for a PAT kick. After an encroachment call on the Dragons, Limon lined up for a two-point conversion, which was successful. Limon kicked off with an 8-0 lead.