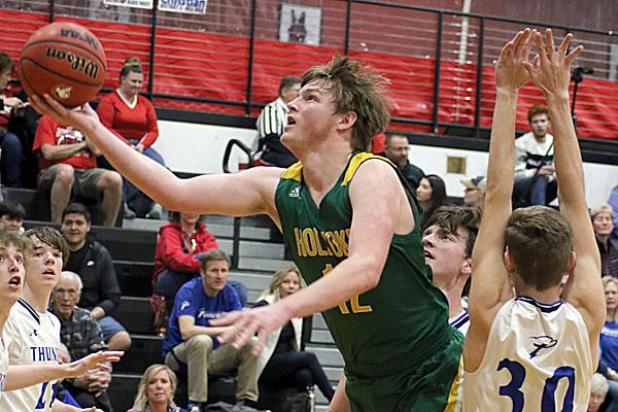 Anyone tempted to reduce the 2019-20 Holyoke High School boys basketball season to its win-loss record would be seriously missing the big picture. For those who followed the Dragons from their start in December, it was so clearly a year of great growth.

“Over the last month of the season, we really started to hit on all cylinders,” coach Marcus Kammer said. “We showed that we would be a tough team to beat in any situation.”

Their upward trajectory carried the Dragons all the way to the regional tournament after a second-place finish in districts — a feat that would have seemed quite unlikely earlier in the season.

Despite early setbacks, Kammer described the team as a group that wouldn’t give up. “Attitude and effort always continued to be there all season,” he said.

In Peyton for regionals on Friday, March 6, No. 23 Holyoke played No. 10 Denver Christian. The Thunder won 60-44. In the same bracket, No. 7 Peyton beat No. 26 Plateau Valley 61-29. In an incredibly close championship game, Peyton beat Denver Christian 44-40 for the regional title and a state tournament berth.

Holyoke’s 60-44 loss to Denver Christian in the regional tournament was quite the close game — even going into the fourth quarter. The Thunder powered through, though, for a strong finish.