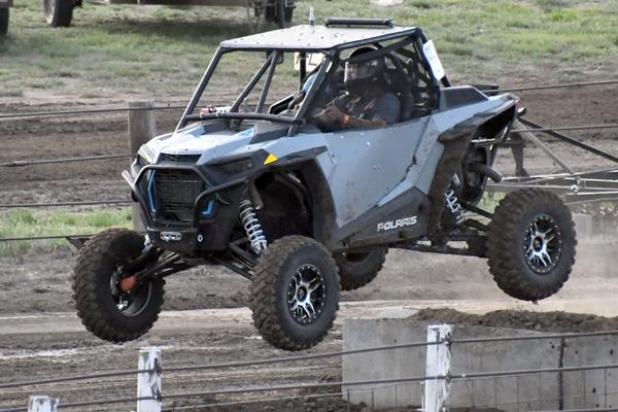 A professional UTV driver comes off a ramp in the infield of the track at Phillips County Raceway as part of a new event at PCR this year. Hungry for racing action, drivers and fans turned out May 29-30 for the season opener at PCR. — The Holyoke Enterprise | Johnson Publications 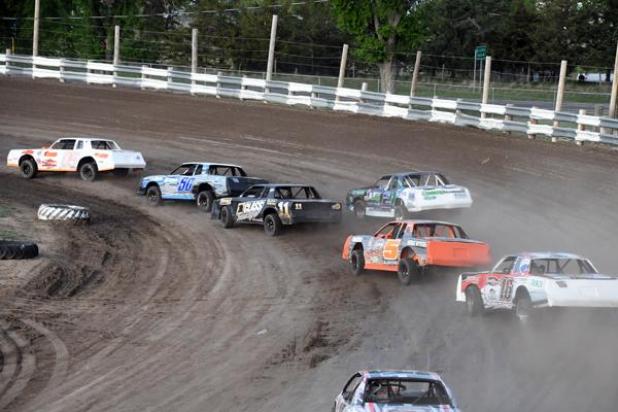 Action begins as cars take turn No. 1 in Saturday night heat races at Phillips County Raceway at the fairgrounds in Holyoke. While the track usually opens in April, a later start-date had been planned from the get-go at PCR. Organizers, racers and fans were pleased that they could stick to the planned May 29-30 opening doubleheader, even if numbers were restricted. — The Holyoke Enterprise | Johnson Publications

“This is what freedom looks like,” said Phillips County Raceway promotor Joe Bellm at the Saturday night segment of PCR’s season opener.

After being forced to limit socialization for more than two months, the community was ready for some outdoor activity, and PCR provided it.

“It was a breath of fresh air,” said Bellm, adding that it was nice to get back to some normalcy. Seeing people interact and racers having such a good time was a highlight for the weekend as PCR was one of the first tracks to open, even though it was on a limited basis.

Social distancing in the stands was accommodated as much as possible, and Bellm said he has been flooded with texts and messages of appreciation for the freedom to be part of an activity.

“We just took it for granted that we could get together to race,” said Bellm, acknowledging that it’s appreciated much more now that it was taken away for a time. “It’s nice to get some of that back,” he added.

Bellm said the push behind stock car racing is not only the sport itself but to impact the economy.

Within the numbers constraints, he said they had a phenomenal turnout for the May 29-30 races and look forward to the next outing on Friday, June 19.

Three racers came from California to compete in the lightning sprints action. Others traveled over five hours to be part of the racing competition and spectatorship.

New to PCR this season is UTV racing. More commonly known as side-by-sides, three vehicles competed at PCR. Instead of racing the oval track, the utility task vehicles race the roval. Bellm explained that this is a twisting course on the track and the infield.

Drivers started in front of the grandstands, then turned into the infield to face telephone poles on the ground, as well as ramps and other items along the obstacle course.

While the season opener featured professional and semiprofessional UTV drivers and vehicles, Bellm said they will be adding a beginner novice class which they hope locals will join.